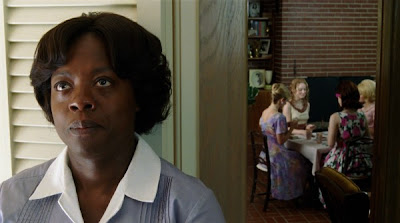 It's Mississippi in the 1960's when Eugenia otherwise known as Skeeter comes home determined to become a writer. She takes on the job as as household chore advise columnist for the local newspaper. She asks her friend Elizabeth Leefolt if she could ask her maid Aibileen Clark some questions about housework. It's during her conversations with Aiblileen that Skeeter decides the bigger story may be found in the lives of the maids from their own voices.

Emma Stone plays Eugenia “Skeeter” Phelan who comes home from college wondering why the maid who was practically her mother when she was growing up was suddenly dismissed from her family's home. Skeeter's exposure to the larger world and the common sense upbringing from Constantine Johnson (Cicely Tyson) has made her a woman without prejudice totally unlike the women who remained and married in her small town. Aibileen (Viola Davis) a middle aged African American has worked her entire life raising the white children of her employers. She works for Ms. Leefolt who is revolted by her own daughter because she's chubby and not very cute. She leaves her in the care of Aibileen who dotes on the child filling her with self esteem that she cannot get from her own parents. Hilly Holbrook (Bryce Dallas Howard) is the high society snooty leader who employs Minnie Jackson (Octavia Spencer) because she's the best cook in Jackson. The white ladies also spur one of their own as being considered poor white trash who just happen to marry a rich guy. Skeeter's enlightened attitude gives her pause when she notices the slights, injustice and human decency not extended to the women whose hard work is not appreciated in the families for whom they toil. She proposes to Aibileen to tell her story for a book that could be published by Harper & Row in New York City who is interested but needs at least a dozen other maids to share their experiences. Afraid of the repercussions the women are less than forthcoming.

Adapted by Kathryn Stockett's best selling 2009 novel of the same name, Tate Taylor wrote the screenplay in this his directorial debut. A sometime actor Taylor had previously did a short film and one little seen feature called Pretty Ugly People. He was childhood friends with the author and had optioned the book early on. Stockett wanted Taylor despite pressure to have a bigger name auteur attached. The intertwining story of the three women brings to light the turbulent times back in the late 50's early 60's Civil Right era in the south. Despite the obvious question of Hollywood racism regarding whether this movie could have been made if it did not have a white major character takes away from the fact the movie is effective. The performances by all the cast are outstanding. The film manages to create a feel good camaraderie as the working class pull their bourgeois employers into the modern world. If it takes a typical movie treatment to educate the generations who have no perspective of this time in our history, then so be it. In the big picture, we as humans should be treating everyone no matter what class or color with respect and dignity.
(Review by reesa)

Email ThisBlogThis!Share to TwitterShare to FacebookShare to Pinterest
Labels: The Help review