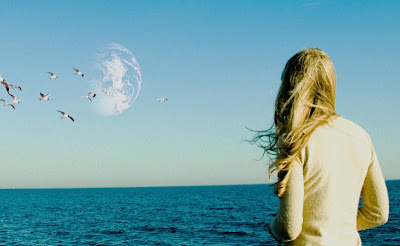 The idea of another earth existing in another dimension has been played with in science fiction countless of times. Director Mike Cahill wrote the script with Georgetown classmate Brit Marling about a mirror earth being spotted in our skies. It begs the question of what your other self would think about you. The film received the Sundance 2011 Alfred P. Sloan Feature Film Prize which focuses on science or technology as a theme, or depicts a scientist, engineer, or mathematician as a major character.

Rhoda Williams (Brit Marling) is celebrating her acceptance to MIT at a party with friends. On the way home she hears the news report about another planet appearing in the sky over earth. As she leans over to look at the sky she slams into a SUV killing the mother and child and puts the father in a coma. Her science career is over as she is sent to prison. Four years later she is released. Still racked with guilt, she gets a job as a janitor at the local high school. Investigation of the planet is getting more intense as they decide to send a manned mission to visit. United Space Ventures is offering seats for a hefty price. But they are also holding a contest to win a chance to fly by writing a 500 word essay. It's like a slight hope to fulfill her dream.

On the anniversary of the crash, she visits the site and sees the father leave a remembrance. She discovers his name is John Borroughs (William Mapother) who was a Yale professor and a composer. After he awoke from his coma he withdrew to his old house living on medication and alcohol. Rhoda tracks him down hoping to get the nerve to apologize, but ends up making up a story about offering a free trial house cleaning. Eventually she cleans the whole house and awakens his life again.

This is basically a story with Buddhist like mediations on forgiveness and redemption with the scifi element thrown in. Beautifully photographed, the story is told in linear fashion with a few flashbacks. The soundtrack includes original music by Fall On Your Sword is as the director aptly describes as “organic classical meets electronic”. Each of the characters had a particular sound when they were on the screen with Rhoda being a cello and John a piano. There's a nice atmospheric piece played by John on a saw. The director was inspired from hearing the fragile melancholic sound by a street performer in a subway. Marling plays the emotionally damaged Rhoda like a broken bird afraid to fly. Mapother's sullen and angry widower connects with Rhoda although doesn't quite suspect there's something more to Rhoda being in his home. It may be slow going and perhaps too long in sections, but it's also like a stone thrown in a calm pond and the ripples vibrate long after you leave the theater.
(Review by reesa)

Email ThisBlogThis!Share to TwitterShare to FacebookShare to Pinterest
Labels: Another Earth review