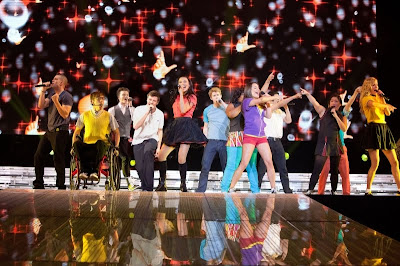 The Glee phenomena began in 2009 when the TV show about a high school choir competition aired on FoxTV. A weekly feature with singing, comedy and drama was a big gamble, but through the talented cast and the sharp insightful writing it became an instant hit. The show tapped into the universal need of acceptance. The students at Prospect High in Illinois who join Mr. Schuester's choir class are considered a target for having a frozen drink thrown at them. The bullying, belittling, and harassment of being different in that microcosm that we all had in endure during out teens rang true as young and old embraced the characters and how they dealt with these issues through music.

Everyone loves to sing with the radio and Glee does a wide range of popular music covers of classics and contemporary hits. Last year, the Glee cast performed in a sell out 13 date concert tour of North America. After a European extension, it was announced that a 3D version would be filmed in East Rutherfold, NJ. Directed by Kevin Tancharoen the film features the actors in their character's persona as if getting ready for a concert. There's backstage interviews with Rachel, Brittany, Artie, Santana, Puck and the Warblers. Interspersed with the musical numbers are little features with real teenagers who have faced difficulties in their lives because they like the Glee choir don't fit in. They relay how Glee has helped them become more confident and comfortable with their oddities. The dwarf cheerleader becoming prom princess, the young woman with Aspergers and dyed pink hair finding her voice and friends through the show, a gay teen inspired by Kurt who was not afraid of being the only gay person in school. The film also panned the very enthusiastic audience waiting in line outside and singing along with the musical numbers inside.

Mini melodramas aside, the musical performances were outstanding. It's just what you would hope American Idol would be like in concert. The cast includes all the choir members of the show Dianna Agron (Quinn Fabray), Chris Colfer (Kurt Hummel), Darren Criss (Blaine Anderson), Ashley Fink (Lauren Zizes), Kevin McHale (Artie Abrams), Lea Michele (Rachel Berry), Cory Monteith (Finn Hudson), Heather Morris (Brittany Pierce), Chord Overstreet (Sam Evans), Amber Riley (Mercedes Jones), Naya Rivera (Santana Lopez), Mark Salling (Noah "Puck" Puckerman), Harry Shum, Jr. (Mike Chang) and Jenna Ushkowitz (Tina Cohen-Chang) and the substitute teacher Gwyneth Paltrow (Holly Holliday). Jane Lynch who plays Sue Sylvester did not make it to the finished film which is probably why her ad for the movie says it sucks. Most everyone gets a solo number that was made popular on the show. It's a big stage and the cast makes good use of it bouncing all around and singing at the same time. To give their dancing a break professional dancers are brought out to enhance some of the acts.

Lea Michele is a stand out with her rendition of Barbara Streisand's Don't Rain On My Parade. Amber Riley's power vocals Ain't No Way. Kevin McHale channels Michael Jackson while Harry Shum, Jr. shows off his dancing skills. The Warblers in their school uniforms featuring Darren Criss did three songs that were featured on the show. It's too bad they didn't give Chris Colfer enough solo time. Fortunately the numbers were short and sweet. Paltrow comes out and shows off her pipes in a cheesy number before exiting by saying something about going out for tacos. The little underdog dramas about how the show empowered their lives were nice, but basically unnecessary. It just means time taken away from the music. The film is coming out in a limited run August 12 for 2 weeks in selected theaters. Don't forget to stay until after the credits to see an encore and a video of a little Asian boy impersonating Blaine. Get Gleeked!
(Review by reesa)

Posted by Dallas Movie Screenings at 2:18 AM