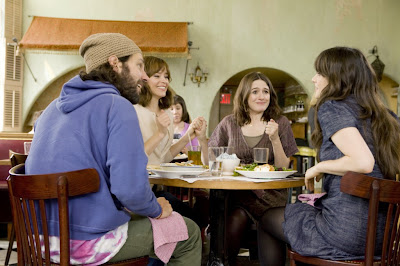 Ned is hippie dippy long hair and bearded sort of guy who sells biodynamic veggies at a small farmers market in an upper New York state town. He's such a nice guy he practically gives the food away. When a local cop asks him for some pot to get the edge off, he gives it to him. Of course he gets arrested and send to prison. When he's released after winning best inmate four months running he goes back to stay with his wine drinking mom. His three sisters who live in the city come for dinner and one of them reassures Ned that her door is always open to him.

Paul Rudd plays Ned with a naive charm and innocence. When he had gone back to his farm commune he found Janet (Kathryn Hahn) his girlfriend for the past three years has moved on to Billy (TJ Miller) a good natured stoner who apologizes. Ned's not too upset, he just wants his dog back. Janet refuses to give up their dog Willie Nelson. Broken hearted he decides to head to the city to stay with his sister Liz (Emily Mortimer). She's an earth mother type with the practical shoes and a 7 year old son River and his baby sister Echo. Their dad is Dylan (Steve Coogan) a documentary filmmaker who is doing a movie on a ballerina who gives Ned a job on the set. His other sisters are Miranda (Elizabeth Banks) a hyper journalist who works for Vanity Fair and bisexual Natalie (Zooey Deschanel) who is a part time painter's model and night club comedienne. Ned's appearance in their daily lives turns everything up side down. While babysitting his nephew River, Ned teaches him about fighting which goes against his sister's child rearing plans. Ned steals the spotlight from Miranda's interview subject and gets the information she was trying to weasel out of her. Ned inadvertently tells Natalie's lesbian lover Cindy (Rashida Jones) about his sister's her recent infidelity with Christian (Hugh Dancy). But that's not all that happens. Ned is a force of good that causes a run of bad luck for those around him who don't seem to live quite the honest life they should. He believes that if he sees everyone in a positive light then everyone will live up to that belief.

Directed by Jesse Peretz from a script written by his sister Evgenia and David Schisgall who created the main character with Paul Rudd in mind. This isn't the typical dumb guy comedy like another annoying Adam Sandler movie. Ned is a man child but he has a heart of gold. The person you can just be yourself and who accepts you unconditionally. His easy going manner and life puts everyone at ease. He's got a stoner mentality that's so laid back he even tells his parole officer he smoked. He understands and accepts his sister's failings, while they grouse about their “idiot brother”. Their mom played by Shirley Knight should have been given more screen time as the mellow wine drinker who beatifically oversees her brood during dinners. The little sibling arguments are spot on with the whole dysfunctional family dynamic. We love you to death, but you are weird. The action and scenes flip quickly as the different crisis points come to a fruitation. So when the final catharsis comes in the final act you can leave the theater feeling good about yourself. Definitely worth the popcorn.
(Review by reesa)

Email ThisBlogThis!Share to TwitterShare to FacebookShare to Pinterest
Labels: Our Idiot Brother review