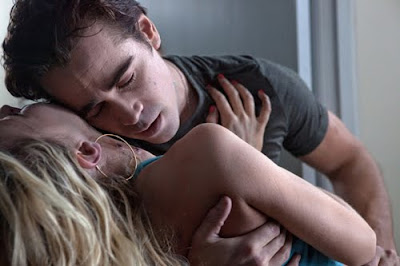 Charley Brewster used to be a dweeb. He and his friends Ed and Adam used to dress up in costumes and role play. Now that Charley is a senior in high school he is trying to erase that image to impress his steady girlfriend Amy. That is why when his former best friend Ed wants Charley to help him investigate the mysterious disappearances in the neighborhood armed with a bag of stakes, Charley has to be blackmailed with evidence of his past self to join him in his search for their missing friend. Ed tells him his new neighbor is a vampire and no matter what, do not invite him into the house. The Las Vegas suburban tract home neighborhood is perfect for vampires because most people work at night and sleep during the day.

Charley's mom Jane (Toni Collette) is flirting with the hunky new neighbor who says he does night construction. Jerry (Colin Farrell) apologizes for the mess in his yard while flirting with Jane and Charley's girlfriend Amy (Imogen Poots). After Ed disappears, Charley notices the stripper across the street visiting next door. Jerry comes over to borrow some beer, and Charley tests Ed's theory by watching Jerry not move farther than the door's edge while making small talk to get him to slip with an invitation to come in. Later after hearing a scream he breaks into Jerry's house to find the stripper locked away. After helping her escape with unexpected results Charley decides to contact Peter Vincent the Las Vegas strip showman who does a vampire slayer spectacular on stage. Vincent (David Tennant channeling Russel Brand) seems to be a snake oil salesman although his place is filled with serious occult memorabilia. Vincent does harbor a secret that may help Charley with his vampire problem.

Director of Lars and the Real Girl Craig Gillespie knows how to take normal everyday people in extraordinary circumstances and still keep them grounded. The screenplay based on the story by Tom Holland was written by Buffy the Vampire Slayer TV writer Marti Noxon who infuses the characters with that same kind of snarky humor. The film is just what a remake should be. Keeping the elements of the original 1985 movie and adding a contemporary viewpoint that is easy on the pop culture references. The 3D elements only seems to work well when vampires are disintegrating, but otherwise the scenes are too dark to be effective. The morphing from human to predatory vampire mode is curiously vicious looking but also flat. Look for a nod to Chris Sarandon from the first Fright Night in the last act that only fans of the first movie will appreciate. This is not your jump from your seat kind of horror movie although there is some biting, blood, and creeping around in the dark. What stands out in this film is the humor and scene stealer Dr. Who's David Tennant. That alone is worth the popcorn.
(Review by reesa)