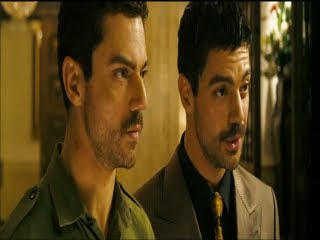 New Zealand director Lee Tamohori brought us Once Were Warriors in 1994 and after has given us nothing but blockbuster types like Die Another Day and Next. The dark edge of the world created in this first feature were followed by big budgets and the Hollywood machine. The Devil's Double also takes a look at unfamiliar territory. In the 1990's news told stories of Saddam Hussein's need to have body doubles to impersonate him around Iraq and it fend off any assassination attempts. Most people don't know that his eldest son's Uday Hussein also employed a political decoy.

Latif Yashia (Dominic Cooper) is an Iraqi solider brought to Uday luxurious mansion. They were once child hood acquaintances and Uday remembers that people once thought they looked alike. Under threat of harm to himself or family he's forced to undergo cosmetic changes and wear fake teeth to make the disguise complete. Even Saddam himself accepts Latif as his 3rd son. Munem (Raad Rawl), Saddam's “fixer” is in charge of educating Latif on the nuances of the seriously self indulgent hedonist Uday. He's like Scarface Middle Eastern style. He loves to torture people, snort mountains of coke, pickup young school girls to rape and kill, even a newly married bride without the slightest moment of pause. Everyone turns a blind eye to Uday's indulgences. Munem explains that Saddam had rescued their country and build the roads, mosques and prosperity. The only thing he asked in return was to leave his family alone. Under that onus, Uday's excesses are ignored and even enabled. They want Latif to just accept the bounty around him and go with the flow. The only boundary placed on his behavior is not to take any woman that Uday had made a previous claim. Of course Sarrab (Ludivine Sagnier) Uday's favorite begins to seduce Latif and he can't seem to resist her charms although he knows the dangers of such a liaison. As long as Latif is just giving the troops speeches during the Gulf War, or shaking hands with dignitaries, he can handle the gig. Assassination attempts and watching the increasing horrific behavior of psychotic Uday, Latif is willing to give up his life than continue the masquerade.

The whole movie rides on the back of Dominic Cooper who played the singing fiancé in Mama Mia. So it's surprising to discover that you forget that he's doing both parts. He makes Uday and Latif into two distinct characters even when Latif is impersonating Uday. Latif has the kinder eyes, and Uday's manic insolence is almost too cartoonish. There may be lots of comparisons with Al Pacino's flashy sociopath gangster. It's a masterful performance enhanced by digital technology that blends the two on one screen seamlessly.

Tamahori based the film on the events that occurred during Saddam's reign of power but some of the details have been changed to make it more cinematic. The real life Latif Yashia even has a small role in the film. It moves along at a good pace and justice is served to a satisfying Hollywood ending. Just remember it's just based on the legend, for the real story Google it.
(Review by reesa)