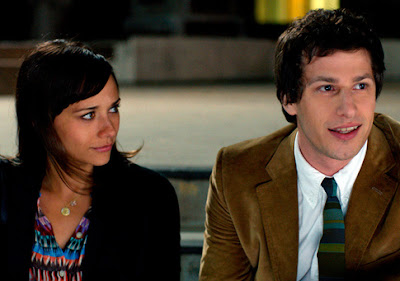 This delightful indie by Rashida Jones and Will McCormack and directed by Lee Toland Krieger who won the 2009 Emerging Filmmaker award for his film “The Vicious Kind” at the Denver International Film Festival debuted at Sundance this year. It's sort of an anti-romance tale where the couple in question are divorced but still acting like best friends. It's a story of how to let go, move on and grow up.

Celeste (Rashida Jones) had written a book called Shitegeist and works as an expert analyst on trends. Jesse (Andy Samberg), her ex is a wanna be artist/slacker/man child who can't seem to move away from the only thing he knows...his relationship with Celeste. Child hood friends, a couple through high school and collge they were married for 6 years before Celeste gets frustrated by Jesse's lack of ambition. He's still living in the studio behind her house seeing her every day, speaking in their own language cultivated by years of being together. Their best friends Beth (Ari Graynor) and her fiance Tucker (Eric Christian Olsen) find it unsettling that they still act like they're married when they are not.

Celeste is a bit of a control freak and defines everyone around her in sound bytes. Even when the guy from her yoga class tries to flirt with her, she reads him like a book in a smug self satisfied way but still nailing her impression of him. Meanwhile Jesse runs into an old girlfriend that he had a brief fling after the divorce and suddenly he discovers he's going to be a dad. This is the issue that will force them to actually break up for good, or possibly make them realize what they mean to each other. Celeste starts to spin out of control when Jesse seriously starts to accept his new situation and actually evolving away from her. The comedy does resort to Celeste doing a dumpster dive and getting drunk at parties involving their mutual friends. There's also the ongoing joke between the couple where they pretend masturbate a tube of lip palm, or speak with German accents.

The movie also has a interesting secondary characters like Elijah Wood as Celeste's gay business partner , Skillz (Will McCormack) as Jesse's pot smoking buddy and Emma Roberts as a pop superstar that Celeste has to “rebrand”. The resulting logo turns out be a gay Izod.

Samberg does a really good job making Jesse a very likeable guy who has never flown alone and knows he relies too much on Celeste as a friend and confidant. Jones is beautiful (thanks to her parents Peggy Lipton and Quincy Jones) and effective showing Celeste's struggle to finally accept being right all the time is sometimes wrong. Although you may want to have them get back together, you also know for their own sanities, breaking up is the best way to go. There's a naturalness to all the performances which you don't find in the usual Hollyweird rom com's that are forced fed upon the audience. Not just a chick flick, but a nice story on the civilized way to break up.
(Review by reesa)