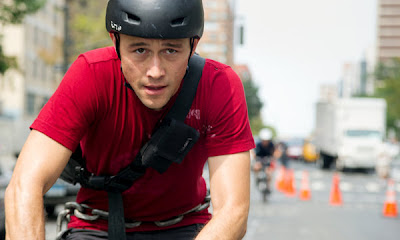 Looking at the poster for this new movie it would seem the title is Ride Like Hell with the catch phrase Premium Rush instead of the other way around. Directed by David Koepp who also wrote the script with John Kamps. We are told there are 1500 bike messengers in New York City risking their lives for $80 on a good day. It's obvious that it's the adrenaline that keeps this close knit community of messengers weaving in and out of traffic watching out for each other in times of need. And apparently these drivers are all in tip top condition with strong legs and plenty of attitude. This high octane joy ride with bike outlaws through the streets of New York will keep you at the edge of your seats fuelled by a pumped soundtrack.

Joseph Gordon-Levitt plays Wilee an ex law student who thinks getting stuck behind a desk wearing a suit is the worst possible existence for him. Instead he loves the freedom of the streets, maneuvering in the crowded city traffic while his brain contemplates split second scenarios posed by the possible outcomes of bike vs cars and pedestrians. He's a daredevil who drives a pared down bike without the gears or breaks for the raw experience. It seems sexy and dangerous to his girlfriend Vanessa (Dania Ramirez) and a challenge to competitive Manny (Wolé Parks) who is also trying to woe Vanessa. The last ride of the day is delivering an envelope from the law school to Chinatown by 7 pm. The ride would have been uneventful, but there's a cop on his tail who wants that envelope and he will do literally anything to get it.

The story line swings back in forth in time to show why the cop came to that point. He's a gambling addicted detective Robert Monday (Michael Shannon at his crazy wild eyed best) who has anger management issues. He owes some Russian loan sharks and Chinese gambling houses some big money. He's been informed the envelope contains a ticket that is worth $50,000 from Chinese money launderers. When he's chasing Wilee at breakneck speeds it comes to the attention of a bike cop (Christopher Place) who also joins the chase.

What makes this different from the 1986 Quicksilver with Kevin Bacon is the snarky wit between the dirty cop and Wilee as they shout and bait each other during the pursuit. Shannon's hot tempered cop is scary and funny as he insults everyone, grimacing, shouting and sneering. All he needs is a moustache to twirl as he does it. Gordon-Levitt sustained an injury while filming requiring 31 stitches for a slice down his arm is believable as the risk taking messenger. While there's some typical formula pacing, the scenic rides around the city gives a ride worth taking. A fun movie to end the summer.
(Review by reesa)