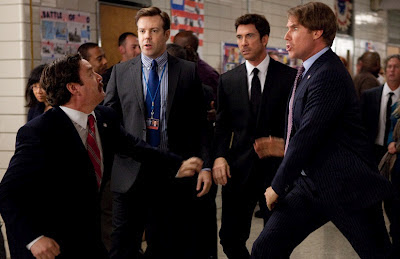 In this election year it's not surprising to find a movie on candidates and their races for seats of power. Director Jay Roach (Meet the Fockers) with a screenplay by Christ Henchy and Shawn Harwell turn a couple of unlikable characters into prospective Congressmen looking to win the 14th District of Hammond County in North Carolina. With their overdone drawls stars Will Farrell and Zach Galifianakis make fun of lives of those who hold office and their battle to keep the status quo.

Farrell as a promiscuous Democratic politician Cam Brady looking to serve his fourth term in office is a cross between George Bush and John Edwards. His dumb as dirt gaffs are quickly handled by his champaign manager Mitch (Jason Sudeikis). His poll numbers take a dive when he makes a wrong number sex call to who he thinks is his new hot girlfriend. Enter Marty Huggins a normal slightly effeminate guy who is recruited by his father Raymond (Brian Cox) as a pasty for the corporate fat cats, the Motch brothers (John Lithgow and Dan Aykroyd), who plan to sell Hammond to the Chinese and open sweat shops to save on shipping prices. They finance his champaign and send in slick mysterious Tim Wattley (Dylan McDermott) who takes over Marty's life, his home, his wife, kids and even switches out his dogs for something more vote friendly. There's lots of “they didn't just do that” scenes that include punching a baby and The Artist dog. Good old boy sexist humor and jokes that just go on too long.

The battle between the two heat up with personal attacks and champaign ads that challenge good taste. Cam Brady's answer to everything when giving his thumping speeches is “America, Jesus, Freedom” which highlights how hoodwinked the voting public is by embracing the sound bytes. Coached by Wattley, Marty responds to Brady with his own lispy promise of “look out Washington, I'm coming to clean up because it's a mess!”. Farrell in his usual overkill character who as usual is his own worse enemy. Galifianakis comes off better by giving Marty a little bit of heart as he tries to stay true to himself and his willingness to sacrifice. This film probably would have been more effective as a biting satire, instead it's the too often seen bumbling dumbed down slapstick Hangover humor that makes fun of everyone with no real purpose.
(Review by reesa)

Email ThisBlogThis!Share to TwitterShare to FacebookShare to Pinterest
Labels: The Champaign review