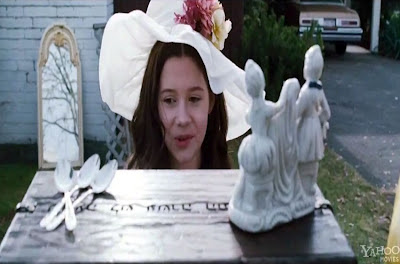 Based on a real story of a Dybbuk box carved with Hebrew inscriptions supposedly containing some evil spirit that caused sickness and ill fortune to the owners. It was told to have been bought at a garage sale, then later sold on Ebay, and each time the buyer experienced some bad juju. The Hollywood version was written by Juliet Snowden and Stiles White and directed by Ole Bornedal (Nightwatch) and produced by Sam Raimi. Obviously they added their own fright sandwich to the mix, which despite it's great cast does little in the way of adding anything new to the demonic possession genre.

Ten year old Emily (Natasha Calis) the youngest daughter of Clyde and Stephanie (Jeffery Dean Morgan and Kyra Sedgwick) finds this box at a garage sale. She immediately becomes fixated with the box which was introduced in the first scene where an older woman tried to attack it with a hammer ends up getting mysteriously thrown around the room. Even at the garage sale Emily sees the bandaged woman from the window silently screaming “no” to her. This doesn't deter Emily who brings it home and finds the secret latch. Inside are old dusty containers of odd bits, petrified bugs, carved animals, and a big tooth with roots. No one seems to notice that Emily is acting a bit spacey lately. They all seem to have their own agenda. Older sister Hannah (Madison Davenport) is in preteen all about “me” mode, mom is entertaining her new boyfriend, dad who is a basketball coach just moved into his new house and is contemplating taking a job in another state. They all seem to chalk up Emily's increasingly odd behavior to coming to grips with the parents divorce.

It isn't until Emily stabs her dad with a fork, that Clyde begins to think that his daughter is having an unusual obsession with that box and tries to dispose of it. Instead of crushing or burning it he takes it to a random dumpster. Which of course Emily makes it seem daddy dear smacked her around runs out of the house in her night gown straight for the dumpster. Mom thinks the worst of dad, until Emily goes to school and savagely beats another student. The teachers say she should get checked out by a medical professional. So she gets an MRI where mom and sis see this image of a head inside Emily's body when the electricity flickers during the test. Did the doctors see this too? No one is saying. Dad decides to check out the Hasidic rabbi's in Brooklyn who tell him it's in God's hands. Except for the rabbi's son Tzadok (Hasidic hip hop/reggae musician Matisyahu) who helps the desperate family.

The big difference in this film as opposed to others of this nature is the Jewish element which offers a different slant than the regular Catholic priests compelling the devil within. It also fortunately does not perpetuate the incorrect usage of the the Pentacle as a symbol of evil. There's really no jump in your seats frights, lots of moths, a dentist losing his teeth (no on really likes him anyway), some random teacher getting killed, fingers sticking out of someone throat and other grotesque images that are quick but carrying no sense of urgency or horror. And why don't people turn the lights on in a room? If you hear something weird, do people really wander around in the dark to investigate things that go bump in the night? Big yawner.
(Review by reesa)

Email ThisBlogThis!Share to TwitterShare to FacebookShare to Pinterest
Labels: The Possession review