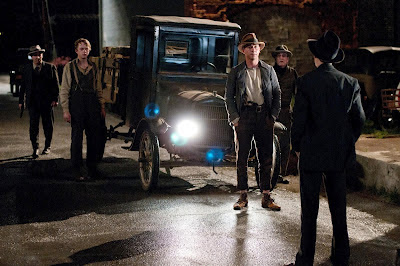 Matt Bondurant's 2008 novel the Wettest County in the World was based on the stories he had heard of his grandfather and great uncles in the Prohibition era of Franklin County, Virginia. Directed by John Hillcoat (The Road) and adapted to the screen by Nick Cave (The Proposition also directed by Hillcoat) it follows the lives of three brothers who are involved in bootlegging moonshine during the 1930's. It's a bloody, ruthless chapter in American history during the Great Depression which has been done a million times before but this time with better and more memorable performances.

The Bondurant brothers include Tom Hardy as Forrest the middle brother and ring leader of the clan. Older brother Franklin (Jason Clarke) who came back for WWI half crazed from surviving the trenches and the youngest brother Jack (Shia LaBeouf) who is awed by his older brothers and narrates the story. The local police and the bootleggers all work together for their mutual monetary benefits. That is until Federal Special Deputy Charlie Rakes (Guy Pearce) the citified dandy from Chicago comes to enforce the law. It's an us vs. them mentality in them thar hills as Forrest tries to unite the moonshiners who are reluctant to incite any attention. After all even big city gangsters like Floyd Banner (Gary Oldman) can come to town and machine gun another vehicle in a drive by shooting.

Forrest and Howard have this unspoken communication between the two of them when it comes to business. Howard spends his days drinking their product being the muscle and attack dog. Forrest with his no neck, marbles in the mouth speaking voice (could have used subtitles at times) is a no nonsense character. A myth surrounds him that he's immortal having survived near death situations in the past. They are also protective of their little brother Jack who wants to become a part of the family trade. Jack is the more ambitious of the bunch and sees Banner's operation as something he strives to mimic oblivious to the danger and violence involved. Moonshine is a way of making quick money for Jack in the same way as drug dealing attracts the young and stupid today. Jack's best friend Cricket (Dane DeHaan) who may be a bit physically handicapped is also a genius when it comes to motors and building super stills. Jack is also smitten by the lovely and religious Bertha (Mia Wasikowska) the daughter of a Mennonite preacher. Maggie (Jessica Chastain) ran away from her nightclub dancer job in the big city to work at the Bondurant brother's cafe and base of their operations becomes the love interest of Forrest. Their inclusion is the movie is not as predominate in the book. Pearce's Rakes is a sociopath, a sadist, with a parted trench down his shoe shined hair, wearing gloves to keep from touching the ugliness of the world around him. If he had a moustache he would be twirling it.

There's a lot of gory violence and mayhem in this film balanced by the scenic beauty of the Appalachian country side. The color palette, costumes, motor vehicles and other period details effectively engulf the viewer into the time and place woven with a bluegrass soundtrack. There's the slow build up and tension of the bad guys and our outlaw heroes battling in the modern old west, or east as this is supposed to be Virginia. Somewhere in this narrative may be a commentary about never-ending battle between entrepreneurial business and government interference of our free market system. But generally it's a old fashioned tale about a family and survival with some really good actors.
(Review by reesa)