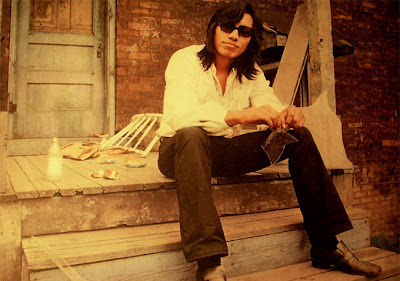 The opening film of the 2012 Sundance Film Festival was the documentary by Malik Bendjelloul that won the Special Jury Prize and the Audience Award for the best international doc. It has since gathered other Audience Awards at the LA Film Festival and the Durban International Film Festival and the Grand Jury Prize in Moscow. It is a chronicle of how some fans in South Africa came to find the American musician known as Rodriquez who put out two albums in the early 70's. He was unknown in his own country but his music was an anthem for the youth growing up in the apartheid regime.

Discovered playing in a smoking bar in Detroit with his back to the audience, Sixto Rodriquez made two albums of folk/pop songs for Clarence Avant's record label Sussex Records in 1970-71. His insightful lyrics that spoke of the harsh inner city living rivalled Bob Dylan in it's social consciousness but didn't reach an audience in the states and he was eventually dropped from the label. He raised three daughters while working construction labor and running for political office. Completely unaware that his music was insanely popular in another part of the world.

Rumor was that an American brought his album over and copies were shared on tape. At the time Cape Town South Africa government tightly controlled the information, products and ideas from the outside world. The influence of Rodriquez's music was emotionally felt as soundtrack to the lives of young people who honored the artist like they did the Beatles. But nothing was know about him. Stories circulated that Rodriquez committed suicide on stage in a number of different gruesome methods which only added to the myth. It took the work of a couple superfans Stephen 'Sugar' Segerman and Craig Bartholomew Strydom who investigated via the lyrics in this songs. Just when they were going to give up, they followed a line that mentioned Dearborn. In 1998 they were able to come face to face with the man who changed their lives. And Rodriquez discovered a legion of fans who turned out in droves for 6 sold out concerts.

The film is paced with archival footage, the stark desolate streets of Detroit under snow while interspersed with his music and interviews with friends and fans. Rodriquez's bright camera ready daughters offer insight into their father who never let them feel that his failed music career was anything for shame or disappointment. Even his friends and co-workers had a hard time believing that he was bigger than Elvis in Cape Town. Any profits that he made from the resurgence of his career all went to family and friends. His modesty and appreciation for the love that he was given was enough for him. This is a truly inspiring and remarkable tale. One that will make you want to go find his music and listen to it hard.
(Review by reesa)

Posted by Dallas Movie Screenings at 1:18 AM