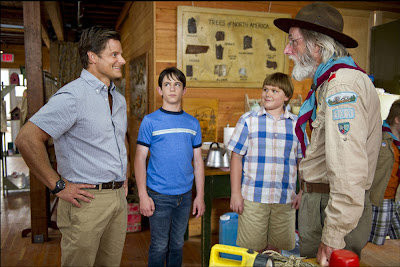 Based on the third and fourth book of popular Diary of a Wimpy Kid series by Jeff Kinney, the new feature film follows the continuing misadventures of the Greg Heffley. The episodic pacing is probably like chapters in the book where each scene flips from one to another without any semblance of rhythm and flow.

Teen age Zachary Gordon is back playing Greg as the middle school kid getting out of school for the summer. His dream summer consists of spending the days playing video games. He even sets an alarm so that he can be off the game before his dad gets home from work. Like all of Greg's plans he gets found out and his father takes away all television privileges. He ends up going with his best friend Rowley (Robert Capron) to the country club pool with his parents. Greg is impressed with the easy smoothies, and empty pool. But what causes his biggest problem comes when he sees Holly (Peyton List) who he's got a major crush working. He ends up lying to his parents that he got a job at the country club as an excuse to keep going back. His older brother Roderick (Devon Bostick) finds out and tries to take advantage of the situation by making Greg sneak him in too. Eventually his father finds out about his lying and instead of yelling and screaming as usual he's disappointed. Greg is afraid that his father is going to send him to prep school. Roderick advises him to be the best Wilderness Scout ever and hopefully he will make his father proud.

There's a lot of stuff going on in this and most of the Wimpy Kid series. The main lesson in this particular set is the relationship or lack of thereof between Greg and his father. Obviously they are very much alike, but for some reason can't seem to find common ground outside of an inane comic strip that they both don't understand. The slow maturity of Greg actually learning from his mistakes, and his dad's appreciation that his son starts to own up to faults binds the two in that natural progression that should happen between growing your men and their dads. His father tells him that “a man who never made a mistake, never made anything”. It's just a little hard to feel sorry for the selfish kid who only thinks of his immediate gratification. There are eight books in the series, so we will probably be subjected to at least a couple more films where Greg will continue making mistakes.
(Review by reesa)

Posted by Dallas Movie Screenings at 1:34 AM