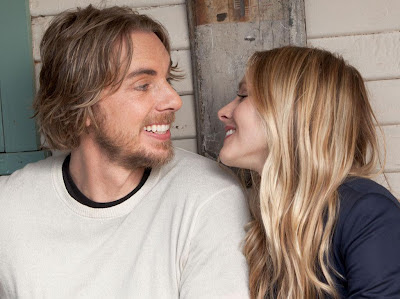 Dax Shepard of the currently popular TV series Parenthood not only stars in this feature, but also produced, edited, wrote and co-directed with David Palmer (their first film being Brother's Justice). His fiancé Kristen Bell plays his girlfriend in this slapstick homage to 80's car chase films like Smokey and the Bandit and Cannonball Run. It even features Shepard's personal beautifully restored 1967 Lincoln Continental.

Shepard plays Charlie Bronson who is living under the Witness Protection Program, his real name being Yul Perkins. He testified against his partners of multiple bank robberies in which he was the get-away driver some 4 years earlier. Now living in the small California town of Milton with his girlfriend Annie who works at the local college, he's monitored by vehically challenged US Marshall Randy (Tom Arnold). Annie gets an offer for a job in Los Angeles and she needs to drive the 400 miles or so to the the interview. Charlie/Yul who has not been back in all these years decides he's spent enough time under protection and he will take her there in his dad's Lincoln Continental that was the only thing he brought with him to his new life. Annie's ex boyfriend Gil (Michael Rosenbaum) was earlier informed of Charlie's status as a WP thinks that leaving with Charlie is a bad idea because he still carries a torch for Annie. So he follows them and asks his gay brother cop for help. Gil discovers Charlie's real identity and Facebook's Yul's old partner Alex to his whereabouts. Alex Dmitri (Bradley Cooper in dreadlocks) and Yul's old fiancé Neve (Joy Bryant) are also join the pursuit.

The heart of this film is the sweet relationship of Charlie/Yul and Annie with the issue of trust revolving around his old life. There's many scenes of interesting conversations between the two of them that have nothing to do with the story of Charlie's misdeeds. As a sociology professor Annie is constantly berating her good natured lunkhead boyfriend on using terms like “fag”. His response is funny and insulting to lots of persuasions until he finally relents to her argument. The rest of the movie is the old school car chase with Tom Arnold overplaying his accident prone character. Bradley Cooper is the vicious leader of the gang who beats up and humiliates this large African American man over what kind of dog food he feed his animal then tells him no one wears a wife beater anymore unless it's ironic. While this film is amusing at times, it's also probably not worth paying a full price ticket so wait for the dollar cinema or Netflix.
(Review by reesa)

Email ThisBlogThis!Share to TwitterShare to FacebookShare to Pinterest
Labels: Hit and Run review