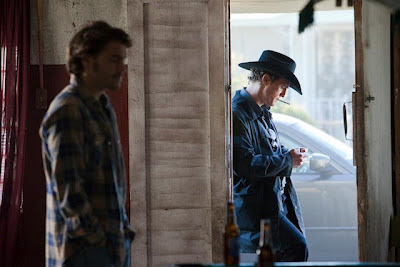 Pulitzer Prize for Drama winner Tracy Letts wrote the play for Killer Joe in 2003 and he also wrote the screenplay for the film version. Directed by 73 year old William Friedkin who brought us The Exocrcist, The French Connection and whose last feature work was Bug in 2007 shows that he can still capture the audience attention in this darkly humorous film that has been rated NC17.

Chris (Emile Hirsch) comes back to the trailer home of his step mom Sharla (Gina Gershon starting the film in a revealing first scene), his dad Ansel (Thomas Haden Church) and his sister Dottie (Juno Temple). Seems he owes $6000 to drug dealer Digger (Marc Macaulay) because Chris's mom stole his coke that he was supposed to sell. His dad doesn't have that kind of money so Chris hatches this scheme to kill his mom (no one will miss her anyways) and the insurance beneficiary sister will collect $50,000. He was even told there's a guy name Joe (Matthew McConaughey), a Dallas detective who moonlights as a contract killer. The only trouble is that Joe wants $25,000 up front. Chris proposes to pay him after they collect the settlement. Joe is about to walk off until he sees Dottie and suddenly offers to accept a “retainer” in the form of his little sister. It doesn't take long for them to make the deal and what comes after that is something that you won't expect.

Suffice to say there is not one redeeming character in this whole movie. The trailer park family is as dumb as dirt. Ansel is a mechanic, smokes pot with his son, and pretty much goes along with what everyone tells him. Sharla runs around without her pants, cheats on her husband, and works as a pizza waitress. Dottie is a sweet virginal Daisy Mae type full of little girl innocence in cutoffs and tank tops but somehow knows what's going on. Chris is full of half @ss ideas that don't really come to fruition like being a rabbit farmer. His plans only see the possible result completely skipping the practical applications. Like offing his mom and pimping out his sister only to pay off the dealer who promises to kill him in a couple of days after beating the crap out of him. Meanwhile Joe is slick and menacing. His intonations are more like whiny nasal growls. Cool and unflappable only becoming subjugated to winsome sexuality of Dottie.

Friedkin didn't allow any improvisation by his actors keeping true to the written script. At times it's bogged down by that same structure. There's plenty of nudity, violence and one scene will make you abhor chicken legs afterwards. The poor white trash absurd comic surrealism borders on excess. But it will keep your attention and it will make you laugh out loud, nervously perhaps in an OMG sort of way. One has to wonder how they did this as a play on stage and how many buckets of chicken they went through.
(Review by reesa)

Posted by Dallas Movie Screenings at 1:38 AM