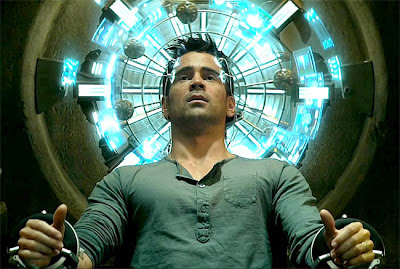 Not exactly a remake of the 1990 film of the same name this version leaves out the whole Mars element and adds instead bit of the Blade Runner location. Director Len Wiseman and writers Kurt Wimmer and Mark Bomback have created a convoluted storyline that is pieced together by action set pieces and attractive actors. No signature pop culture lines will be taken away from this feature.

Collin Farrell plays Douglas Quaid who is married to Lori (Kate Beckinsale) in the eastern hemisphere of the colonies. It's 2084 and the world has been devastated by chemical warfare leaving most of the world in an unlivable “no-zone” where you need gas masks to breath. Doug works in the factory that builds synthetic soldiers on the assembly lines. Lately he's been feeling like he wants something more, especially when he's passed over for a promotion by the job going to someone from the UFB, commonly known as the United Federation of Britain which is located in the western hemisphere where the better haves live. Doug has been having these intense nightmares so he considers going to Rekall were you can have memories implanted. All you have to do is tell them your dream in life like being a rock star, CEO, athlete or a spy. Doug likes the idea of a spy. So before they send him on his journey he's tested to make sure that his scenario won't conflict with his reality. Just when things look good, they find somethings amiss and pull him off, then all hell breaks loose. The UFB cops arrive fully loaded, and somehow Doug is able to wipe them all out.

Farrell is quite good portraying the confused normal guy who suddenly finds himself able to shoot, fight and evade. When Lori tells him that he's not Doug Quaid, she's not his wife of 7 years, and she's been giving him “good wife” for the past 6 months, Doug starts to run from her murderous attacks and the police that are in pursuit. Enter Melina (Jessica Biel) who comes to his rescue and who he recognizes from his dreams.

You will see a lot of elements from other movies here besides Blade Runner there's The Bourne films, The Fifth Element and a touch of Star Wars. This movie doesn't have much to do with the original film nor from the source material of the Philip Dick short story We Remember For You Wholesale. It's a stand alone piece, but it does incorporate some things like the weird lady at the souped up x ray machine and the three breasted woman. What this movie does have is non stop action. Lori the wife for some reason is always there chasing him. Must be nice to be married to the director. It's just the storyline about political factions that's supposed to be the reason that Doug is someone else that is almost too much and often times confusing. But who cares, the cool races in air cars, parkour over the elevated building in the Colony, and chases through criss crossing elevators the movie is fun to watch. Just go home and watch the Schwarzenegger version for a better time.
(Review by reesa)

Posted by Dallas Movie Screenings at 1:43 AM