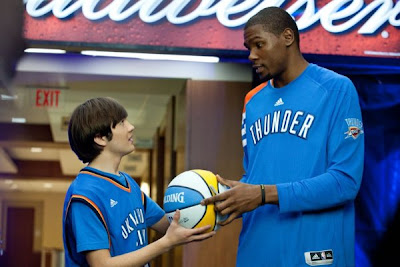 Kevin Durant, three-time NBA scoring champion and Olympic gold medalist, headlines this new family flick directed by John Whitesell and written by Eric Champnella and Jeff Farely. It has as freaky Friday twist with the basketball star's talent being magically shifted to a 16 year old klutz who is is biggest fan. Durant says that the biggest hurtle in acting was to pretend to miss the long shots to the basket.

Nickelodeon star Taylor Gray plays Brian, the water boy for his small town high school basketball team. He's been trying out for the team every year, but he's hopelessly athletically uncoordinated. His basketball hero is Kevin Durant (as himself) the star of the Oklahoma Thunder. In his mind Brian tries to visualize Durant's moves on the court and while trying that out at home and horribly failing. His worst moves end up being broadcast to the high school in the lunch room cafeteria while he is trying to make a movie on the new girl in school Isabel (Tristin Mays). His dad (William Ragsdale) takes him to a Thunder game to ease his humiliation. It's there that's he's won a chance to do the half time long shot throw for a big prize. Instead he spurs another viral You Tube moment by hitting the mascot. Durant magnanimously signs the basketball for the star stuck Brian. When Brian wakes the next day he discovers that he's got mad talent and Kevin is suddenly in a major slump.

The high school coaches wonderfully played by James Belushi and Robert Belushi are thrilled by their new star who is taking them to the state championship. Meanwhile Kevin's agent (Brandon T. Jackson) is trying to figure out why his client has suddenly lost his game. Brian is delighted with the new attention and respect from his peers but it starts to go to his head to the consternation of his best friend Mitch (Larramie Doc Shaw) and Isabel.

As a family movie there's the crisis that must be solved, the valuable lesson to be learned and the belief and confidence in oneself that must be acquired. It's all nicely packaged in a TV movie type of pacing and imaging that's amusing and somewhat entertaining. One is keenly aware that Kevin is NOT an actor, but he's supported by a competent cast. The racially diverse cast covers most politically correct demographics. While some of the high school kids bully Brian in the beginning no overt revenge plots are payed back except to be upstaged by Brian's new basketball skills. Of course the big scene stealer's are the Belushi's and that alone will help keep mom and dad entertained when they inevitably have to bring their kids to this movie.
(Review by reesa)

Posted by Dallas Movie Screenings at 12:20 AM