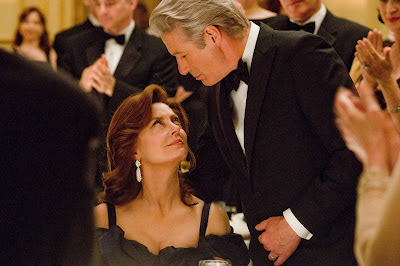 According to Wikipedia arbitrage means the practice of taking advantage of a price difference between two or more markets: striking a combination of matching deals that capitalize upon the imbalance, the profit being the difference between the market prices. You don't really have to know that to watch the new film written and directed by documentarian Nicholas Jarecki staring Richard Gere as Robert Miller a billionaire hedge fund magnate. It's like Wall Street but much better.

It would seem Robert Miller has it all, a successful business, private planes, chauffeured cars, and respect of his peers, He gives a moving and touching speech to his family gathered to celebrate his 60th birthday at his beautiful New York City home. Susan Sarandon plays his smart supportive wife who runs a annual charity event that attracts all the local powers that be. Then the layers begin to be revealed. Miller has Julie (former Victoria's Secret model Laetitia Casta), his French mistress on the side. She's a petulant artist who is upset that he 's not divorcing his wife. Miller is also in the process of selling his company. To make it more appealing to the buyer he's borrowed some money and moved some numbers. Miller is a pro at fast talking as he tries to keep the lender at bay and working a slight of hand on the auditors who have to go over the books until the deal comes through. The buyer is making himself unavailable in a ploy to make Miller nervous and accept a smaller offer. On top of all the plates he is spinning, his daughter Brooke (Brit Marling) who works as his chief financial officer notices some discrepancies.

Gere is a very fit, handsome charismatic actor and still has a full head of hair. His performance as Miller should be duly noted as a stand out come awards time. He's able to convey Miller's ego without remorse, a man who is confident, in control and myopic when it comes to the bottom line. So when a deadly accident puts the lead detective Bryer (Tim Roth) on his tail the story starts to simmer with nail biting urgency. The detective would love to put away one of the rich guys and is willing to manipulate the son Miller's long time chauffeur who had unwittingly helped as a favor. When Miller is asked if he thinks money will fix this, he says what else is there?

It's hard to feel sympathy for Miller, and fortunately the director Jarecki doesn't make judgements with his characters. Although the audience is hoping that Miller will get his comeuppance on one hand, on the other it's still interesting to see if he can weasel his way out. The women in the film may have a small part until the third act when Miller realizes what all normal folk already know, that men may think they are the leaders of their universe, but it's the women who grease the wheel.
(Review by reesa)

Posted by Dallas Movie Screenings at 12:59 AM