End of Watch and Interview with Michael Pena and Natalie Martinez 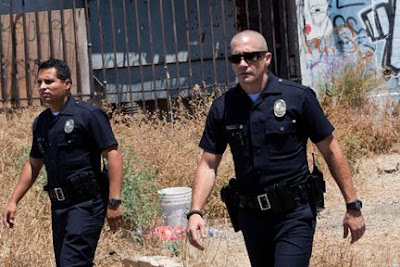 If you have ever seen the TV show Southland, take that then amp it up a few levels of intensity and you will have director/writer David Ayer's End of Watch. Like his other screenplay Training Day which told the story of two opposing cops, this one realistically portrays the friendship and brotherhood of two young men in blue. Michael Peña and Jake Gyllenhaal bonded over five months of training with real officers on their watch. Gyllenhaal who mounted a campaigned to be in the film was given credit as an executive producer due to his commitment to the project. Ayers who grew up near the battered area known as South Central directed two other LA cop films Harsh Times (2005) and Street Kings (2008). The term South Central is now out of vogue and the film was shot in a zone known as Newton.

The film opens with a car chase of a black and white pursing a speeding car through city streets before they manage to crash into them to get them to stop. There's a shoot out when the perps fire weapons in their effort to escape. The adrenalin is pumping up for these street cops. Gyllenhaal plays Officer Taylor who is obsessed with taking videos of his experiences. His partner is Officer Zavala (Michael Peña) who married his high school sweetheart and is expecting the birth of their child. The story takes one on journey of what these young men encounter patrolling their zones answering calls. The relationships with the other officers both women and men, the office politics of teasing their own and pleasing of their superiors, their personal conversations from long hours riding around with each other, and the often horrific nature of the calls they have to answer when on duty.

It's thanks to the chemistry between Peña and Gyllehaal that makes this film rise above the rest of the usual group of movies of this genre. The cops don't have a death wish, they are not corrupt. They have a tough job and they have a sense of loyalty to their own and a responsibility to whom they serve. The supporting characters include American Ferrera and Cody Horn representing the confident tough women in blue, Frank Grillo as the Sarge, and Anna Kendrick and Natalie Martinez as Taylor and Zavala's better half's. David Harbour stands out as Van Hauser an officer who has been passed over for promotion too many times, a stickler for protocol, and often the subject of his co-workers jokes.

This film does not stop for a second from the point of view of a patrol car dashboard camera, from Taylors ever present video camera, from the “shaky cam” shots that are now synonymous with action sequences. It's a bit disorientating to the viewer but it brings one into the scene as more than just a bystander. It's that reliance on the quick edits, and bouncing camera's that makes this not as effective as it could have been. The moments of conversation between the partners inside the patrol cars is probably the best and most honest. A whole movie could be made of just them talking. The gruesome details of some of the crimes they encounter by drug lords, gangs and crack heads may be too much for some viewers. Outside of the camera work it's a solid film and it honors our men in blue. It's about time.
(Review by reesa)

Video by Nathan Ligon of Thank You for Watching and Red Carpet Crash. Questions by reesa and a roundtable of movie critics.

Posted by Dallas Movie Screenings at 1:58 AM