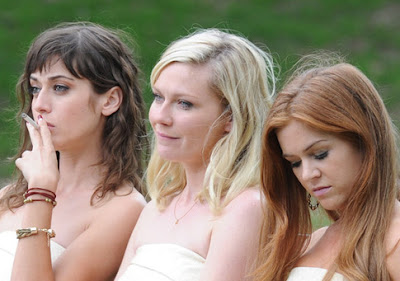 Ever since the success of Bridesmaids the woman-centric comedy is the new trend. Female characters in their mid 20's to early 30's who are just at the edge of still young and stupid meeting the steely stare of mature adulthood is a mine field for arrested development routines. Written and directed by Leslye Headland who was a staff writer for Terriers it tells the story of 4 best friends from high school who come together when one of them is getting married. Just why this odd combination of women would even be BFF's is never fully explained. But their dynamic works because of the caliber of actresses portraying them.

The tightly wound control freak Regan is the maid of honor played by Kirsten Dunst. She relays her work with cancer kids as if waiting for everyone to applaud her selflessness. Lizzy Caplan plays Gena who lives in LA getting fired from endless jobs and sleeping with random men. Ilsa Fisher is Katie who works in retail as a crass burnt out shop girl who makes fun of the customers. Kind hearted and more to love built Becky the bride used to be called “pig face” in high school is marrying Dale (Hayes MacArthur) much to the amazement and of her “b” friends. What starts as a normal rehearsal dinner turns into an interrupted stripper party then slowly deteriorates into Regan, Gena and Katie snorting coke and making bad decisions. Like trying to put two people in Becky's plus sized wedding gown so that Gena could post it to Facebook. Unfortunately their antics rips the dress, and the rest of the movie is an attempt to correct it before the wedding in the morning.

Regan is called “Hannibal” by the guys. Her rep is well founded. She calls the Asian party planner “Chinaman”. Regan has planned this wedding for the past 6 months like a general mapping out a war. She is cold, cynical, and the one that manages to think clearly in times of crisis. Regan has a doctor boyfriend who calls her at the last minute and cancels being her plus one at the wedding. Suddenly she becomes attracted to Trevor (James Marsden) the handsome friend of the groom. Gena is obsessed with running into her ex boyfriend Clyde (Adam Scott) who she always regretted breaking up badly with and leaving lots of unresolved issues. Ilsa Fisher is the stand out here as the ditsy not too bright party girl who hooks up with Joe (Kyle Bornheimer) the computer nerd old classmate. When it comes to fashion she's a rain man, but confesses she has trouble understanding what anyone is saying to her.

The movie starts out like just another wacky wo-mance with rude and annoying behavior. It makes one want to fast forward through the whole dress adventure. But then the characters begin to flesh out. The women begin to show more heart and an honest affection by accepting each other's weaknesses and foibles. The men are thankfully not portrayed as simpletons who think with their crotch. It's not Bridemaids or Hangover, but it scores one any ways as an amusing romp.
(Review by reesa)