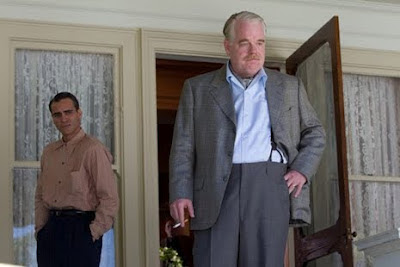 Paul Thomas Anderson who has brought to the world an eclectic collection of work such as There Will be Blood, Punch Drunk Love, Magnolia and Boogie Nights adds another original piece to his collection of films that shine a light on the alienated American family dynamic. From the impressive opening sequence of music and visuals The Master will grab you by the throat and won't let go for the next 137 minutes of running time.

Joaquin Phoenix should be up for an Oscar for his portrayal of Freddie Quell a hunch backed alcoholic sexually obsessed service man during WWII in the Pacific. After the war he's kept in the hospital loaded with pills to rehabilitate him back to becoming a civilian. Taking a job as a department store photographer doesn't stop his philandering or his moonshine skills until he eventually cracks under the normalcy and wanders as a migrant worker and then homeless when someone almost dies from his hooch. He stows away on a party boat docked in San Francisco waking up to find himself being welcomed by Lancaster Dodd (Phillip Seymour Hoffman). Quell is like a feral animal, leery of someone being nice to him and at the same time enjoying the positive strokes. Dodd tells him he's the captain of the ship as well as author, doctor, scientist and philosopher. Why he welcomes this dangerous young man into his circle of family and supporters is perplexing to them as well as it is to Freddie.

There's been some discussion that Lancaster Dodd and his cult religion called The Cause is loosely based on Ron L. Hubbard and his Dianetics. Where the Scientology method employs a procedure called “auditing” to probe traumatic memories, The Cause uses similar techniques they call “processing” that takes one through a person's past lives. They also do the staring at each other, heckle therapy, and the initial analysis that is used in Scientology by asking the recruit a series of questions. There's a particular scene in the film where Dodd asks Quell some test questions that is mesmerizing and destined to be a classic.

It's almost a love story between Quell and Dodd as they are both attracted to what the other doesn't possess. Quell lacks impulse control, answers to no one, and has no immediate thought of anyone or anything only dealing what's in front of him without concern of consequences. Dodd is a charismatic snake oil salesmen who is according to his son (Jesse Plemons) makes the stuff up as he goes along. They are both tempered by Dodd's 3rd wife (Amy Adams) who one believes is the real power behind the throne. She warns Dodd that they have to cut Quell loose as he's too unpredictable, and probably beyond saving. Dodd hangs on as long as he can even though Quell beats up anyone who who disrupts or criticizes Dodd. At one point Dodd is arrested for running a medical school without a license and Quell attacks the police. The jail scene done in a single shot is one that you will never forget.

The look of this movie from the costumes and sets are immersed in the time period. The soundtrack by Jonny Greenwood is haunting working as almost another layer of dialogue to convey that sense of pain and destiny. It's balanced with moments of complete silence that makes the senses crackle with immediacy. Sure, there are some slow moments, and this will probably not have the same wide appeal of his more popular films. Its one that requires patience and attention, one will be awarded with truly a masterpiece of film making.
(Review by reesa)

Posted by Dallas Movie Screenings at 2:17 AM

Email ThisBlogThis!Share to TwitterShare to FacebookShare to Pinterest
Labels: The Master review