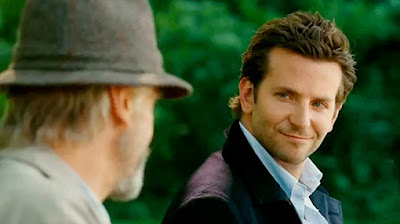 The directorial debut by Brian Klugman and Lee Strenthal in which they both collaborated on the screenplay (they also co-wrote Tron: Legacy) is like a Russian nesting doll. It's a story within a story within a story. The concept is probably the most interesting element of this movie. The script probably is what attracted the high level of actors to the project. However the resulting application is a good reason why this is a September release.

Rory Jansen (Bradley Cooper) has always wanted to be a writer. He moves to Brooklyn with his girlfriend Dora (Zoe Saldana) who set up their apartment so that he can concentrate on his great American novel. The resulting book is considered as one agent tells him as being “too arty”. It's the kind of book that would only sell if it he was an already published author. He's forced to ask his dad for help with his rent, then gets a job in the mail room of a publishing company where other failed writers are also working hoping for their day in the light. Rory and Dora take their honeymoon in Paris where he finds a worn satchel that contains a hidden manuscript. The frustrated writer in him is so enamoured with the work that he types it verbatim into his computer just to feel like what it would be like to write something so remarkable. Dora reads it thinking that Rory created it and is moved to tears. She's so impressed Rory can't bring himself to tell her that it's not his work. That's the first lie that propels him into a life of fame and fortune on the tail of this tall tale.

The book gets the attention of a scruffy old man (Jeremy Irons) the real writer of the manuscript who stalks Rory and lets him know how that story was created. It also fills Rory with guilt and remorse and he wants to to the right thing. The dilemma is also the plot of a novel by Clay Hammond (Dennis Quaid) which he is relaying during a book reading. So the story we started since the movie opened is just a story from his book? A beautiful student writer Daniella (Olivia Wilde) comes on to Clay during a break at the reading playing a creepy sexually charged game with the older man and wanting to know how the novel ends. But like this movie, there's no lesson learned, there's no clear cut resolution.

The only tension of the story is the confrontation between the old man and Rory. The old man tells him the story of his story which is played out for us on screen. It's basically the only time where there's an emotional reality to any of this film. Watching Rory squirm caught in his web of lies. But that's it. And that's how you will leave the theater thinking something got lost in the translation.
(Review by reesa)

Email ThisBlogThis!Share to TwitterShare to FacebookShare to Pinterest
Labels: The Words review