Perks of Being a Wallflower 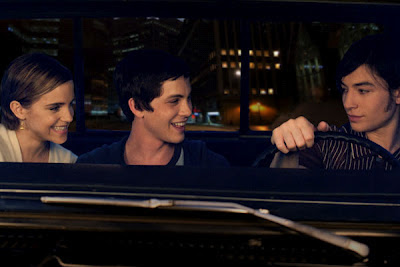 It's not often that the author of a novel gets to write the screenplay and direct the movie. Stephen Chbosky's 1999 novel about an introverted high school freshman Charlie. The film is currently being touted as a John Hughes type of film a lot like the Breakfast Club which also dealt with troubled teens. The story is set in the early 90's Pittsburgh suburb neighborhood dealing with such things as awkward adolescence, drug use, homosexuality, and that perfect mixed tape playlist. Like in Hughes movies, the music of the times is what keeps everything afloat.

Charlie (Logan Lerman) narrates the story by writing to “Dear Friend” as he explores his experiences of being a freshman. He's a quiet book reader, obviously not comfortable meeting new people, sitting alone in the cafeteria, being harassed by foul mouth fellow students. He endures, watching and internally assessing. Until he meets the gay and flamboyant Patrick (Ezra Miller) the only senior in his shop class who challenges his teacher to call him Patrick or “nothing” thus encouraging everyone to label him with that nickname. Patrick takes the shy Charlie under his wing introducing him to his step sister Sam (Emma Watson with a passable American accent). Charlie is instantly smitten by the beautiful and sassy Sam. Sam is impressed with Charlie's taste in music for a freshman. Sam has a bit a reputation and a knack for falling for the wrong guys. They introduce him to their group of friends all seniors who take him into their land of misfits. For the first time Charlie has friends. His advanced English teacher Mr. Anderson (Paul Rudd) sees Charlie's gift and encourages him by giving him reading and writing assignments. But there is something more to Charlie that keeps his parents Dylan McDermott and Kate Walsh watching him closely for any signs of his past problems.

While the story follows Charlie indulging the typical teenage folly of eating pot brownies, attending Rocky Picture Show midnight screenings, dating one of girls in his circle unwillingly, it doesn't stray far from the Something Bad that happened to him. Flashes of his Aunt Helen (Melanie Lynskey) keep popping up teasing you as to what traumatized Charlie so much that his family are concerned he may be having hallucinations again. Charlie begins to experience blackouts when a misunderstanding threatens to break up his new formed friendships. Plus the impending graduation of his Patrick and Sam means he will once more be alone culminates in the last act which will of course explain everything. Joan Cusak shows up at the end as the doctor who helps him out.

The perks of this film is although there may be stock characters...the gay guy, the jock, the brainiac know it all...they are all treated respectively. Even Charlie's brother and sister don't come off as selfish bullies but genuinely concerned over their brother's welfare. If anyone ever had a favorite teacher in high school it was probably Rudd's Mr. Anderson. He's cool and savvy enough to know that singling Charlie out for extra assignments would cause him more damage in the school hierarchy. Ezra Miller is the standout in this movie basically stealing the movie from Emma Watson. It doesn't matter how old you are, or if you remember the 90's, this small film sneaks up on you leaving an impression.
(Review by reesa)

Posted by Dallas Movie Screenings at 3:14 AM

Email ThisBlogThis!Share to TwitterShare to FacebookShare to Pinterest
Labels: Perks of Being a Wallflower review