Trouble With the Curve 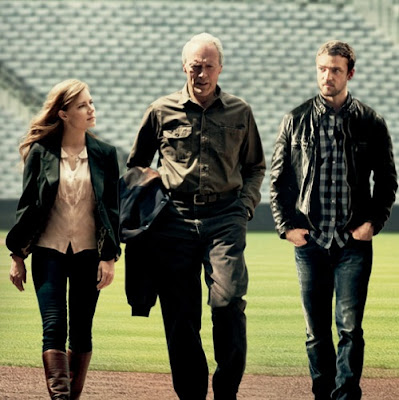 Director Robert Lorenz has worked with Clint Eastwood as an assistant director since 1993 and oversees all aspects of films produced by Eastwood's company Malpaso. He steps up to the plate in Eastwood's first acting role since Gran Torino in 2008 and the first acting role that Eastwood did not direct since In the Line of Fire in 1993. Screenwriter Randy Brown's debut outing sets up stock characters in a very predictable storyline that only works because the quality of the actors involved.

Eastwood plays Gus Lobel an aging baseball scout for Atlanta who has discovered many of the Braves star players over the years. Management wants to farm him out after the season in favor of Tom Silver (Matthew Lillard) who used the Moneyball method of computer generated statistics to choose their next first round drafts. Gus's boss (John Goodman) is concerned for his long time friend and asks Gus's daughter Mickey (Amy Adams) to accompany him on this last scouting mission of a North Carolina high school phenom (Joe Massingill). Mickey is an ambitious, no nonsense attorney who is knocking on the door of a possible partnership with her soulless firm only if she can successfully close a very lucrative case. She is reluctant to leave her job during a crucial time but she does it as she has lots of unresolved issues with her father.

Eastwood has made a career of playing the cranky old man. Gus bristles at the whippersnappers who think that just looking at the cold numbers on the computer can give you the total picture of deciding the next big player. His daughter despite their differences has picked up a few of her father's talents in what to look for in a player's performance. Enter Justin Timberlake's Johnny Flanagan as the young scout who was once a Gus Lobel pick who had to quit game after an injury. Staying in the game as a scout for the Boston Red Sox, he hopes to one day move up to announcer. Obviously a romance is pending between Mickey and Johnny as they travel around watching the game and watching each other.

There are some very lovely moments in this movie like when Gus visits his wife's grave and sings “You are My Sunshine” and when Mickey and Johnny go skinny dipping. Timberlake is proving to be a much better actor and out of that pop star mode. The performances are all top notch taking the by the numbers tale and wringing out some emotional core. Gus comes to grip with the fact he's losing his eyesight, Mickey to understand why her father was so remote and management to realize that a computer can not hear the old school “sound” of that perfect pitch or that perfect hit. Even if you can see the ending coming it still feels good when you get there.
(Review by reesa)

Email ThisBlogThis!Share to TwitterShare to FacebookShare to Pinterest
Labels: Trouble With the Curve review