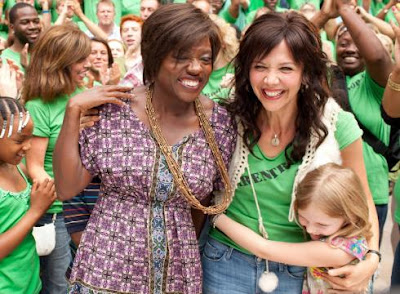 Anyone with a child who has disabilities, who live in a poor school district where there are apathetic teachers and working parents who don't have the time can relate to the dilemma created by writer director Daniel Barnz (Phoebe in Wonderland). The fictional story was inspired by actual events as in loosely based on the parent trigger law in Sunland-Tujunga, California where several groups of parents attempted to take over some failing public schools in 2010. The Parent Trigger Law was passed in California and several other states allowing parents to petition the enforcement of administrative overhaul of under performing public schools. If the petition was successful staff could be dismissed and a charter school could be established.

Jamie Fitzpatrick (Maggie Gyllenhaal) is a single mom working for a used car dealership and as a bartender whose daughter has to attend public school because she can no longer afford the tuition at the Catholic school. Malia (Emily Alyn Lind) is dyslectic feeling depressed from the lack of support from her 3rd grade teacher and bullied by her classmates. Jamie tries to get the tenured teacher to offer more help but she doesn't feel she has too as her job is not threatened so her students run amok in her classroom. Jamie can't even get her daughter transferred to another classroom being stymied by Principal Holland (Bill Nunn) who protects the teachers with little thought over the welfare of the students. Jamie's runs to the school superintendent's office where she learns of the Parent Trigger Law. She is also strongly advised that while the whole thing is legally doable it is set up for failure. There's a 400 page document that must be filled out with “i's” dotted “t's” crossed, teachers and parents of the school have to sign on to the petition, then one has to make an appointment to make an appointment for a hearing, the process would take years to complete thereby making people give up the process in frustration.

Jamie manages to enlist the help of the reluctant teacher Nona Alberts (Viola Davis) who is dealing with her slow learning son, while in the midst of separating with her husband. Her fellow teachers are feeling betrayed by her work on the petition because it would mean the possible loss of their jobs and union protection. Union hack (Ned Eisenberg) begins a smear campaign and scaring the teachers. Union leader Evelyn Riske tries to bribe Jamie by offering her daughter placement in a progressive school if she would give up the fight. They finally get the exiting school board chairman (Marianne Jean-Baptiste) to give them two weeks to get the petition filed.

Maggie Gyllenhaal's Jamie is costumed in that feisty single warrior mom gear of tight jeans and tee shirts and messy hair. As a car salesmen she's got the fearless pluckiness of a woman on a mission. Contrasted by the financially comfortable well educated Nona. Viola Davis gives her an aura of a teacher who was once voted teacher of the year who choose the worst school in the district to work her magic, but finds her self beaten down by the system. The movie plays to the accumulated public attitude that our country's educational program needs a serious major overhaul. The documentary “Waiting for Superman” is a more practical and informative film while Won't Back Down feels a little manipulative with the stereotypical bad guys (the union and teachers not wanting to lose their jobs) and the us against the world heroes Jamie and Nona who are willing to slay the dragons of ineptitude in the name of the children the system is supposed to serve. The message may be a 2x4 across the head, but it doesn't distract from the feel good nature of the story.
(Review by reesa)

Posted by Dallas Movie Screenings at 3:06 AM

Email ThisBlogThis!Share to TwitterShare to FacebookShare to Pinterest
Labels: Won't Back Down review