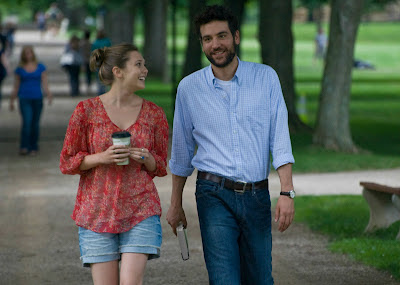 Josh Radnor of How I Met Your Mother and Happythankyoumoreplease wrote, directed and starred in this feature about a thirty five year old admissions counsellor in New York City who returns to his Ohio college to give a speech at his favorite professor's retirement. Its the story of a man too soon experiencing a mid-life crisis with a light gentle comedy that makes for a bemused smile as opposed to the usual raunchy guffaws.

Josh's Jesse is an avid reader. He reads while walking down the street, His house is full of books. He barely registers that his girlfriend is moving out. His laundry is stolen from the laundromat. He's ripe to accept English professor's Peter Hoberg (Richard Jenkins) invitation to his retirement dinner. Jesse returns to his alma mater on a nameless Ohio campus reveling in the memories of being those days when all you were responsible for was going to class, having great conversations and reading all day. (Radnor shot the film at his real life school Kenyon College in Gambier, Ohio) While there he meets free spirited 19 year old Zibby (Elizabeth Olsen) a self professed "old soul" with whom he feels an attraction their 15 year difference not withstanding. He also meets Dean (John Magaro) a brilliant yet mentally unstable young man who is reading the same book that he loved when he went to college. Randomly he encounters hippie party sage/wizard Nate (Zac Ephron) who is like his personal joker/muse who just appears and urges him on with "everything will be alright" to the point where Jesse wonders if he's real.

Jesse returns to New York and he an Ziggy carry on a nice old fashioned letter writing courtship. The flirtation feels quaint as the couple begin to get know each other through prose. After awhile Zibby wants Jesse to become her gentleman caller. The differences seem too vast to overcome and there's a very uncomfortable make out scene in her room. Meanwhile Professor Hoberg is feeling regret about retiring and not sure what to do with the rest of his life. Look for Allison Janney Professor Judith Fairfield as the snooty teacher that Jesse had a crush on when he was a student who doesn't remember him at all. The movie meanders while Jesse is dealing with the realization that maybe it's time to grow up and act like an adult. It's a quiet type of humor that speaks to all of us who still remember what it was like to be young and stupid and can't accept the responsibility of being of responsible adults.
(Review by reesa)

Posted by Dallas Movie Screenings at 2:59 AM