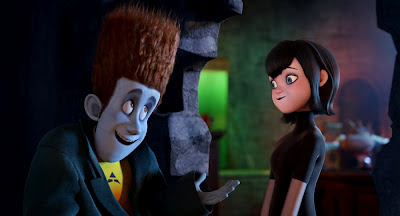 It's 1895 when Count Dracula becomes a father to a Mavis. To make his daughter safe from the world of humans he builds a large castle resort for monsters. Every year he invites them all to a large party event to celebrate her birthday. Directed by Genny Tartakovsky (Samurai Jack) with a screenplay by Peter Baynham and Robert Smigel Hotel Transylvania is a funny family film about over protective parents, pre-judgements and assumptions, and learning to have fun.

Count Dracula (Adam Sandler) is a big softy when it comes to his daughter Mavis (Selena Gomez). On her 118th's birthday plans are under way for the big bash. Monsters from all over show up for a weekend of relaxing and the chance to just be who they are without humans. Among the large collection of monsters and creatures there's the Count's good friends Frankenstein (Kevin James) and his wife Eunice (Fran Drescher), Murray the mummy (Cee Lo Green), Wayne (Steve Buscemi) the werewolf and his wife Wanda (Molly Shannon) plus his large family of puppies, Griffin the Invisible Man (David Spade), Quasimodo (Jon Lovitz) and his rat Esmeralda.

Mavis yearns to learn about the world since her mom and dad met in Hawaii. In order to keep her from running off on her own, her dad offers to let her do baby steps by visiting the local human village. She discovers the humans there are wanting to attack her with pitchforks and fire. What she doesn't know is that the Count set up the false village to instil a fear of venturing from her home. It would have worked but a human back packer wanders in to the local wood and castle thinking the monsters are just people dressed for monster festival. The Count disguises the human into a long lost cousin of Frankenstein so not to cause a panic with his hotel guests. Everyone is told that Jonathan (Andy Samberg) is a party planner since the young man and Mavis are close in ages he can make the party more current and exciting. Jonathan becomes a hit when he makes the senior home type of activities they have doing for years into some new and fresh. Mavis can't help her curiosity when she finds out that the young man has travelled all over the world.

Eventually it becomes evident that Jonathan is the boogie man human, people get mad, Mavis feels betrayed, and the Count has to deal with letting his daughter go, appreciate that she needs to spread her wings and maybe humans are not that bad after all. The celebrity voices are easy to recognize and the dialogue is filled with witting exchanges. It's in 3D, but the expense is not really necessary to enjoy this with your kids.
(Review by reesa)

Posted by Dallas Movie Screenings at 2:52 AM