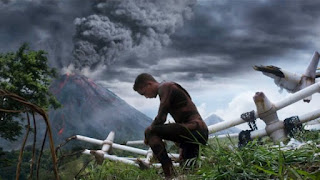 Director M. Night Shyamalan last few movies have been disappointing at best. Teaming up with blockbuster star Will Smith seems like a guaranteed recipe for successful summer movie. Smith came up with the story which was turned into a screenplay by Gary Whitta and Shyamalan. It's a somewhat typical base tale of a young whippersnapper having daddy issues but this time on a deserted planet with aliens trying to kill them.

The planet Earth had been abandoned because humans weren't able to take care of it properly so they have to settle on other planets. Except out there they find very dangerous lifeforms which they call Ursa's. Horrible creatures who can sense the fear in their prey and utilizing ploys like hanging their victims to make the survivors more fearful. One Ranger, Cypher Raige (Will Smith) figured out that if you are not afraid, the Ursa's can't find you. Keeping that mindset is what helps the Rangers keep the aliens at bay. Except by closing himself off to feelings, Cypher has managed to alienate his own family. His teenage son, Kital (Will's real life son Jaden Smith) has failed his Ranger test, and is feeling a bit defensive and frustrated by his seemingly unfeeling father. Cyper decides to take him on his last mission before his retirement. Except their ship is damaged by a meteor shower and is forced to land on a banned planet. Earth.

Cypher and his son are the only survivors of the crash and the father is badly injured with two broken legs. It's up to Kital to find the tail end of the ship to launch the emergency signal. The only trouble is that's at least 60 miles away. With humans no longer interfering with the precious Eco-system, Earth is now teaming with wildlife. Plus, the weather has a tendency to change from hot to freezing frost at night. The air and gravity on this planet is also a challenge. Kital has to face his fears, Cypher has to learn how to trust his son, and both have to work out some pain and guilt over the death of Senshi, the oldest child some years before.

The themes of the movie are broad colored by high tech trappings of it's sci-fi base. The future world has some cool gadgets that lets Cypher monitor Kital's journey and guide him away from trouble, although the kid doesn't listen to his dad like most kids. There's a reason why Kital didn't pass his cadet ranger training. He's of the mind to panic first. This makes his mission particularly problematic,because not only are there the expected wildlife encounters, but there's also a Ursa running around that escaped from the their spaceship. The special effects are decent enough and was happy that the film was not in 3D. Kital has to reach certain levels of his game like adventure experiencing skills and defeating the various obstacles in his path. Cypher's voice is always with him reminding him in what seems to be a lot of Scientology speak about “rooting oneself in the present moment” and “fear is a choice”.

Will Smith may be the big name in this, but it's really Jaden's movie. Jaden is the one running around while his dad mans the controls trying to stay conscious. The climatic battle scene where the son has to put up or shut up could have been better if the monster was a little more defined and less a shapelessly bad CGI threat. Everything is standard in it's story telling, but the movie did look nice, outside of the Ursa. There are moments when it did look like Kital must be running around in circles because those fallen trees looked like the same place only from different angles. The costumes were sleek and well considered. Overall the production quality is great. For an M.Night. Shyamalan movie, it's not bad.
(Review by reesa)

Posted by Dallas Movie Screenings at 1:18 AM

Email ThisBlogThis!Share to TwitterShare to FacebookShare to Pinterest
Labels: After Earth review