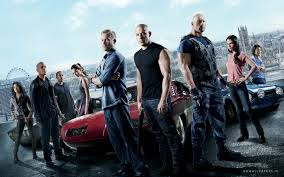 Fans of the series were left with a cliff hanger at the end of Fast Five with the revelation that Letty, Dom's presumed dead girlfriend was really alive and well. Justin Lin who also directed The Fast and the Furious Tokyo Drift, Fast & Furious, and Fast Five is back with screenwriter Chris Morgan who also wrote those movies and is working on the next. The result is a bigger, badder, bolder movie and probably the best of the bunch.

The action is set after the crew are enjoying the bounty of their heist in Rio basically retired from their life of crime. Dom (Vin Diesel) is living with the cop Elena (Elsa Pataky), Mia (Jordana Brewster) and Brian (Paul Walker) just had a baby, Gisele (Gal Gadot) and Han (Sung Kang) movedto Hong Kong, Roman (Tyrese Gibson) is living the high life, Tej (Ludacris) is being more philanthropic. DSS agent Luke Hobbs (Dwayne Johnson) comes to Dom to ask him for his help in bringing down Owen Shaw (Luke Evans) who is responsible for the destruction of a Russian military convoy. He entices Dom with a picture of Letty (Michele Rodriguez), but Dom will only accept if he and his crew get full amnesty so they can return home to the US.

There is everything you want in a F&F movie. Fast cars, exciting speed chases through crowded streets, vehicles blowing up, the grim determined protagonists with their dry and humorous line readings. The action is expected, but what makes this film different from the rest is the sense of family that is established and what the crew is trying to fight for more than mission. Each of the characters gets more screen time as they explore their relationship with each other and their sincerity gives the story line more heart.

Shaw is competent villain and his crew are a direct counterpoint to Dom's team. It's no shock to find that Letty is working with Shaw. She becomes the key point but she is no damsel in distress. For once there's a female fight sequence between two competent women. Riley (MMA champ Gina Carano), DSS agent working with Hobbs and Letty have an epic one on one battle in the subway station. No high heeled, spandex, or perfect hair here. There's some gut kicks, knee strikes, leg scissors and flap jacks. Best fight ever.

There's always some amazing action scenes, and this film gives more than a few sequences like the chase on the freeway that involves a tank. Then chasing down an airplane with arrows and cables. Must see to believe and don't try this at home stuff. Totally unbelievable, but just go with it. Everyone is so totally committed and you can't help yourself get pulled along for the ride of your life. This is one summer movie that doesn't pull any punches. Including the extra scene that end that had the audience gasping and will be anxiously waiting for number seven!
(Review by reesa)

Posted by Dallas Movie Screenings at 10:33 AM

Email ThisBlogThis!Share to TwitterShare to FacebookShare to Pinterest
Labels: Fast and Furious 6 review