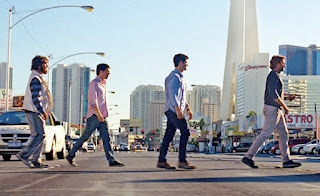 The first thought that comes to mind as the latest adventure of the Wolf Pack unfolds is “why?” Does the world really need another inane movie of arrested developed adults falling into improbable situations with painfully unfunny results. There's obviously an audience for this sort of thing so the movie will most likely find it's target profits. Directed by Todd Phillips who also wrote the screenplay with Craig Mazin doesn't involve a wedding...at least not right away. It's been 2 years since the last events of 2nd version of this formula feature which was a major disappointment so this 3rd time is a charm is a generous statement.

Alan (Zach Galifianakis) is off his meds. After his father passes, the rest of the family and friends decide they need to stage an intervention. The pack, Phil (Bradly Cooper), Stu (Ed Helms), and Doug (Justin Bartha) offer to drive him to the rehab hospital in Arizona. On the way they are kidnapped by Marshall (John Goodman) who wants to find Leslie Chow (Ken Jeong) who escaped from prison in Thailand. They only clue he has it that Alan has been writing to him. Marshall takes Doug as hostage until they figure out a way of finding Chow and the gold that he has stolen.

Driving in Phil's minivan, the pack goes to Tijuana and Las Vegas in their pursuit of the disaster magnet Chow. As usual the pack has shaky plans on how to capture the wily Asian. Alan who has no sense of boundaries, filters or judgement is not really a big help. When they do manage to track down Chow he ropes the guys into various nefarious deeds in order to get the gold to free their friend. But Chow has his own agenda.

The humor is a series of pratfalls and over the top situations that will either amuse or annoy. Fans of the last couple of movies will most likely enjoy the film. The best part of the inclusion of Melissa McCarthy as a Cassie the Las Vegas pawn broker who starts a heated attraction to Alan. Heather Graham is back briefly as Jade who lives happily married with the child that was the infant in the first movie. (Grant Holmquist was one of the several babies that was used in the original movie) Jeffery Tambor and Mike Epps make short and ill fated appearances. The very last hangover scene when you think the movie has ended is the only really amusing moment harking back to the first movie. Although it's straining to insult and leaving those wanting more of this kind of dumb and dumber type of film making. If you like that feeling of one's brain cells dying, then please enjoy.
(Review by reesa)