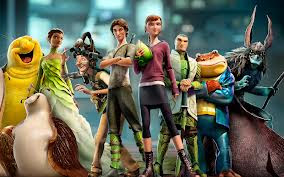 William Joyce's book The Leaf Men and the Brave Good Bugs has been turned into a computer animated fantasy adventure that will please parents and their children who will beg to see it. Director of Ice Age and Robots, Chris Wedge works from the script by Joyce, James V. Hart, Daniel Shere, Tom J. Astle and Matt Ember. It's boasts an all star cast of voices for the story of a battle of good and evil in the deep forest.

Mary Katherine (Amanda Seyfried) who prefers to be called M.K. lost her mother and has moved to her father's house way off the beaten path. Professor Bomba (Jason Sudeikis) is a highly distracted scientist who is studying the evidence of what may be a tiny civilization of creatures who live in the forest. He has motion activated cameras in the trees and special head gear with magnifying glasses to confirm their existence. M.K. stumbles across Queen Tara (Beyoncé Knowles) when the queen is attacked by the leader of the Boggans, Mandrake (Christoph Waltz). Somehow when M.K. catches a glowing fallen leaf she is mysteriously shrunken to the size of the Leaf Men. She encounters Nod (Josh Hutcherson) a young hot headed rookie and Ronin (Colin Farrell) the seasoned leader of the Leaf Men. They help her navigate their world despite that she is a “stomper”, what they call humans, especially her father who they have been misdirecting his search.

Mandrake was trying to stop the Queen from passing her power to a new “pod” When the pod blooms on the full moon of an eclipse, the power of the forest will be restored to the good. Mandrake with the help of his henchmen of rats and bats lurk in the shadows creating bubble like abscesses that cause what ever they touch to decay and die. He plans to steal the pod and create a forest that is dark and dead with the pod's power. The protectors of the pod are a snail (Chris O'Dowd) and a slug (Aziz Ansari) who are charged with keeping the pod “moist” with their slime. Most of the story revolves around trying to keep the pod out of Mandrakes clutches, and finding a way for M.K. to return to her world. M.K. is a spunky heroine who finds a cause that gets her out of her funk and disappointment with her father who she thinks is off his rocker. Nod is the typical young punk who would rather race his bird than accept the role as a warrior and the protector of the forest from his mentor and his father's best friend, Ronin. Both find a way to grow up and take responsibility for their worlds.

The artwork is impressive and the 3D imagery helps the brightly colored film bring to life the spirit of the forest. The story carries the story of family and environment themes without being over bearing. There's some good chases, and the evil gets it's due, but without any traumatic scares for the wee ones. The older kids will enjoy that the Leaf Men move faster in their world, and Stompers sound like they are in slow motion. Great for the family of all ages.
(Review by reesa)