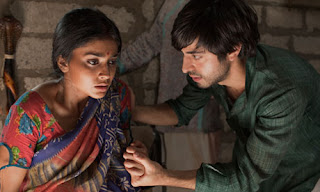 By all accounts Salman Rushdie's novel was considered difficult project to bring to the screen. Rushdie spent two years pairing down his 600 page Booker Prize winning book to a 130 page script. The final script which has a 2 ½ hour running time was written and directed by Deepa Mehta. The shooting of the film had to be kept a secret as Mehta feared Islamic fundamentalists groups. The lush photography creates a magical India in a story that spans 60 years of the main character's life and the multiple twists and turns of his fate.

Saleem (Satya Bhabha) was born between midnight and 1 am on August 15, 1947 at the exact moment of India's independence. His wealthy family is unaware that the nurse switches the babies with the son of a street performer. Shiva who was actually sired by an English colonial and the wife of the street singer will turn out to be Saleem's eternal rival. For some unexplained reason, all the children born during those magic hours have a telepathic link to each other and a unique supernatural gift. Saleem being the strongest is a catalyst that brings them all together. They appear to each other like spirits. They become Saleem's only friends and at times an annoyance.

The historical backdrop of India will probably be unfamiliar to most people. Especially the 1971 Bangladesh war of independence and the state of emergency during the 70's under Indira Gandhi. The negative portrayal of the former Indian Prime Minister caused the film to stop screening by some Indian National Congress leaders. Rushdie apparently loathed Indira Gandhi so it's was probably not surprising. It's still interesting to discover other parts of the world no matter how slightly skewed it could may be.

The story weaves in and out of the tumultuous events with Saleem's adventures that work out to be somewhat like Forrest Gump in India. As crazy and interesting as poor Saleem's life becomes it often times meanders. That apparently works well in the novel, but on the big screen it makes it at time incoherent and painfully slow. The film is visually pleasing and with nice performances by most of the cast, but a large portion could be cut without anyone missing anything. What seems to be the drawing point from most of the film synopsis regards the connections between the midnight's children. However most of that though is secondary and doesn't play that big a part of the story. A good festival film.
(Review by reesa)