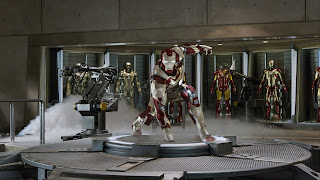 Usually the third part of a trilogy is pretty much a wash out and retread, especially when the second wasn't all that fantastic. Jon Favreau decided not to return to direct and it was given to director Shane Black who wrote the script with Drew Pearce. Their film instills the newest Iron Man series with more heart and with lots of Stark's trademark snarky attitude. It works all because of Robert Downey Jr who has made this metallic superhero into the most popular franchise around. It's not the dark and brooding Batman, or the angsty kid with webs. It's the grown man who is full of ego and faults and the woman who loves him.

The opening prequel in the movie begins in 1999 when Stark meets up with a botanist girlfriend Maya Hansen (Rebecca Hall) who is working on some gene regenerating experiment. He also promises to talk to Aldrich Killian a long haired with a limp scientist who wants Stark's to join his company Advance Idea Mechanics, but in typical fashion Stark forgets. This sets up these characters returning later in the story.

The present time starts after The Avengers battle in New York City and Stark is suffering from Post Traumatic Syndrome and insomnia. Stark can't sleep at night being haunted by his near fatal encounter with aliens and suffers from anxiety attacks. He spends his time creating multiple Iron Man suits and obsessing with tweaking the equipment.

A new terrorist attack in the form of The Mandarin (Ben Kingsley) who hijacks the television airways and starts a brutal bombing campaign in America. When Stark's security chief Happy Hogan (Favreau) is injured during one of the bombing, Stark reacts by giving his home address on air to challenge the terrorist. Little does he know that the Mandarin takes him up on his goading and blows up the Stark compound. Stark has big moments of trepidation as his actions put Pepper in danger and he's afraid that he won't be able to protect her again. It takes young boy named Harley (Ty Simpkins) in a small town in Tennessee to snap Iron Man back to himself

Like all Iron Man movies, or Marvel movies in general, there's lots of stuff blowing up. The bad guys seem almost too invincible in their dastardly plot to control the world. Stark, now without his home base and high tech equipment must now do old school Home Depot tinkering to reconfigure his alter ego. Since everyone thinks Stark died in the house explosion, Col. James Rhodes (Don Cheadle) dons the Iron Man suit (now rebranded at the Iron Patriot) to look for the Mandarin.

Taking the suit away from Iron Man lets Downey explore Stark as a fallible human being. It fortunately stays away from being too cutesy as Stark remains in keeping with his character, unsentimental, somewhat self involved and shallow. Kingsley steals the scenes as The Mandarin, and Paltrow as the patient Pepper shows some spunk in the end, but pretty much is the damsel in distress. This is definitely not The Avengers, but it's a fun way to start the summer movie season. Don't forget to stay for the end of the thousand special effects credits for the obligatory bonus scene.
(Review by reesa