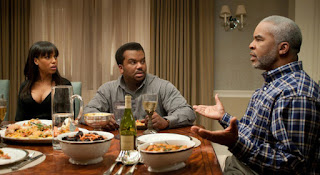 Peeples is a comedy that you wouldn't call typical.  From the very beginning you can guess that it is going to be funny with some twists and turns.  In the very first scene of the movie Wade Walker (Craig Robinson) is entertaining & teaching a song to a large group of children on how to properly use the potty.  This was very funny but I personally had a problem understanding the words to the song and some parts of the rest of the movie. I got use to the sound quality as the movie progressed.  It could have been me but I asked a friend and she said she also had the same problem.

In the next part of the movie Grace (Kerry Washington) Wade Walker's girlfriend is planning on going to her Peeples family reunion in the Hamptons without Wade.  He is not too happy because he has never met her family and was hoping to make the trip with her to meet the them.  She convinces him not to go with her since it is something that her family does each year. She leaves him in New York. Then he decides to surprise her after his crazy friend Chris Walker (Malcolm Barrett) says he need to go and meet the family. Chris Walker then surprises Wade and shows up too. Wade has a plan to ask Grace to marry him.

Wade arrives at the Hamptons (after a very scary boat ride) and it is very obvious that he is in a very high class surroundings.  He was not prepared for the swanky Sag Harbor vacation home. He was introduced to Grace's mother Daphne Peeples (S. Epatha Merkerson) who is a recovering alcoholic. Grace's father Virgil Peeples (David Alan Grier) who was a judge and believes his daughter Grace is perfect therefore no man is good enough for her. Grace's sister Gloria Peeples (Kali Hawk) is a lesbian but the family doesn't know. Simon Peeples, Grace's brother. (Tyler James Williams) is a 16 year old kleptomaniac hip hop dancer.  He realized that he is a fish out of water among this picture-perfect East Coast Clan. Coming to the reunion was not what he expected.  He walked into a high-powered yet typically dysfunctional family who would do whatever it took to keep up appearances.  They didn't know Wade was even in Grace's life. Obviously Wade's plan to propose to Grace meets obstacles. Without giving too much away they all worked out their differences. It was a very fun movie with a lot of unexpected moments.

The scenery was gorgeous.  I laughed a great deal and could picture being in the same boat with someone I was in love with.  Peeples is written and first-time directed by Tine Gordon Chism who joins forces with producer Tyler Perry.  Don't expect it to be anything but fun and entertaining.  We all need a little humor in our lives.  It truly made me smile and laugh a lot though the whole movie.
(Review by Lila Katz)