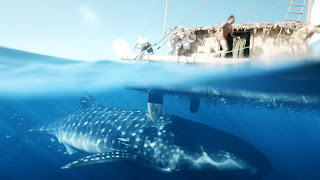 The legendary story of an experimental ethnographer and adventurer Thor Heyerdahl's sail across the Pacific in a balsa wood raft won the 2013 Academy Award and the Golden Globe awards for Best Foreign Film. The expedition was previously documented in a 1951 directed by Thor Heyerdahl that won an Academy Award. It was also chronicled in a TV documentary series The Kon-Tiki Man: The Life and Adventures of Thor Heyerdahl. The 2012 historical drama version was directed by Joachim Rønning and Espen Sandberg with a screenplay by Petter Skavian with script consultant Allan Scott was the highest grossing film in Norway and the most expensive production to date. The film has been dubbed for it's English speaking audience and is amazingly synced so you won't even notice it.

Pål Sverre Valheim Hagen is Thor Heyerdahl who noted the similarities of the statues found in ancient Peru and the Polynesian Moal theorized that the origins of the island people could have been settled by South Americans during the pre-Columbian times. To prove this he embarks on idea of building a raft using the same techniques the indigenous peoples would have used 1500 years ago. Heyerdahl managed to get funded with private loads and donations of equipment. This English version has been edited leaving out some of Heyerdahl's struggles to fund his mission. He and his crew of 5 and a parrot began the trip in April 1947 drifting on the Humboldt Current for 101 days over 4340 miles at an average speed of 1.5 knots before smashing in the reefs at Rarola in the Taumotu Islands in August 1947.

The Kon Tiki was named after the Inca god of sun and storm. The crew tried to keep the journey as true to the materials used during the earlier times, although they did carry modern equipment such as a radio, watches, charts, sextant, and knives. The balsa wood raft had a sail and a small hut on deck for shelter. They ate field rations supplied by the Army Quartermaster Corps, tinned food, 275 gallons of drinking water and caught plentiful fish including shark. Kon Tiki withstood the attacks by sharks and whales, horrific storms, and the general cabin fever that usually occurs when humans have nothing else to do and no where else to go.

The thought of being in the middle of the Pacific Ocean with only a few feet of wood beneath your feet is scary enough. There are moments of crisis with sharks and storms. There's moments of paranoia about the raft breaking apart that stresses the engineer/refrigerator salesman who was Heyerdahl's right hand man. The crew's faith in Thor's obsession and their own sense of adventure keeps the crew from totally flipping out. For the audience maybe knowing that no one was lost during this journey takes the urgency out of the drama. It's interesting to note that Thor didn't even know how to swim when he mounted the expedition.

There's a Life of Pi feeling in the images and the visuals are quite compelling. The beauty of the big blue sea is in stark contrast to the small wooden raft full of tall, lanky Norwegians imagining life of the Peruvians making their way into the unknown. Thor's trip inspired recreations of by other adventurers all met with success most of the time. Thor even tried to sail from Morocco to Barbados in order to show the link between Ancient Egypt and the New World. There's still a debate on whether Thor's suppositions regarding the origins of the inhabitants of the Easter Islands were truly from Peru. But the idea of physically trying to prove your point is still worth some cinematic entertainment.
(Review by reesa)