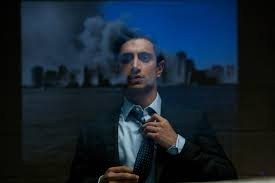 Mira Nair who directed Mississippi Masala and The Namesake takes on a political thriller about a Pakistani man working on Wall Street and the effects of 9/11 on his life. The story is based on the novel by Moshin Hamid who also wrote the script with Ami Boghani, and William Wheeler. The film offers a look from a different perspective following the collapse of the Two Towers. Riz Ahmed, a British actor of Pakistani heritage, who plays the complex title character does an amazing job and will be one to watch.

Changez (Riz Ahmed) comes to the US at 18 years old and attends Princeton. He's bright and intelligent and easily impressing a corporate recruiter and future boss (Kiefer Sutherland) looking for a financial analyst despite his humble background. He seems well suited for his shiny new life that seems to fit in with his goals of being a manager within the next three years. He cute meets the niece of his company CEO when she takes his picture at the park. They begin a romance although she is still mourning the death of her fiancé. Erica (Kate Hudson with dark hair to show her more serious side) is an artist but can't seem to commit. When 9/11 happens Changez is returning from the Philippines on business and is “profiled” at the airport where he's body cavity searched. He's also plucked off the street by police and questioned by Homeland Security. His girlfriend has an art show that objectifies their relationship and he becomes insulted and disappointed. Even his job becomes a challenge when his father reminds him that he should be more empathetic to the people he's putting out of work by what he does for his company. It's no surprise that Changez decides to go back to Pakistan.

Most of the story is told in a flashback. Liev Schreiber plays Bobby Lincoln a journalist investigating the kidnapping of an American professor in Lahore, Pakistan. Now a professor of finance Changez's experience in the world in general gains him admiration from his students. Bobby questions his militant academia that may be linked to the kidnapping. Changez has him listen to this story in order to get his family from being targeted. As a drama, the story is insightful of the events of 9/11 and how it rallied the country to patriotism, but also spurred people to quickly judge and obsess over anyone who looked a certain way. When Changez had returned to the states after his sister's wedding he had let his beard grow because it reminded him of home. Soon his co-workers were talking behind his back and suspecting him.

The movie could have done with some trimming and the meandering between time periods is sometimes confusing. The romance between Erica and Changez and their different cultures could have been another movie. Outside of the means of collapsing another brick in Changez ties to America, it seemed out of place. Overall, it's an interesting film and Riz Ahmed gives a thoughtful portrayal of the complicated stages of Changez's transformation. Hopefully he will get bigger and better roles without people thinking he was in Slumdog Millionaire.
(Review by reesa)

Email ThisBlogThis!Share to TwitterShare to FacebookShare to Pinterest
Labels: The Reluctant Fundamentalist review