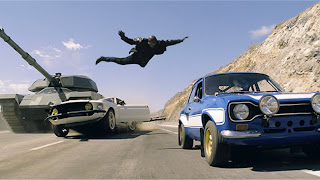 Ah, summertime. The time of the year when stuff gets blown up, actors get paid huge sums of money to reprise roles of superheroes and realism gets tossed out the door all for the sake of drawing moviegoers to the movie theater. This is my favorite time of year because it’s the time when I don’t have to think when I want to enjoy a movie. I can sit back and watch someone get thrown from an eight-story building and get up and run away unscathed and I don’t have to question it. That’s why Fast & Furious 6 is a great movie. It fits right in to the summer movie season. The entire film is overflowing with extreme fights, cars being blown up, lingering shots of women’s backsides and ‘The Rock’ taking any chance he can to try and put a one-liner over on the audience.

Really, the only subject that I need to talk about for this movie is the action. You should know going into this movie to not expect anything that could ACTUALLY ever happen. There are so many cars getting flipped and blown up and characters just crawling out of them, I don’t think it was ever expected to be believed. But that just makes the movie all that more exciting. The chase scenes (which undeniably make Fast and Furious what it is) don’t seem to be any better or worse than the previous movies, but they definitely deliver. They make your heart race and excitement level raise. There are also MANY ‘holy crap what just happened’ moments. Numerous, complete, over-the-top stunts are performed and at the end of the film you’re left with an adrenaline rush that’s comparable to drinking three Red Bulls. Even with all of this action, Fast & Furious 6 actually has a decent storyline.

The importance of family. That is what this film preaches and I love it. Amidst all of the cars and bullets, there is a warmth and truth behind it all. When they fight, they fight for the love of family. All of the choices and all of the actions are based on whom they’re doing it for. It gives you a little tingly feeling if you think about it long enough. On top of the importance of family, the movie also has a story good enough to keep you interested throughout the entire 2 hours. Surprisingly, this movie could carry itself without all of the action (even though it IS an action film).

All in all, I’m very pleased with how this latest instalment of Fast and Furious turned out. It had action, girls, and a great message (though, obscured by the prior two items). I left the theatre with a great rush and a satisfied feeling. I’m honestly very excited for next chapter in the Fast and Furious series, as at the very end of 6 they threw a new character into the mix that I’m sure many people (myself included) are going to be ecstatic about. My suggestion, get to the theatres and see this. If you’re any kind of action fan, you’re going to enjoy this movie. Just sit back, relax and don’t over think the stunts that are happening before your eyes. If you can do that, I promise you will enjoy this great summer film.
(Review by Weston Baker)