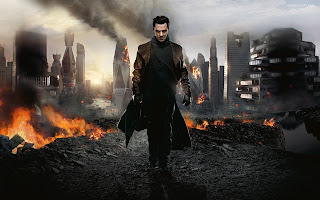 The idea of rebooting the massively popular cult franchise by creating an alternative universe where the familiar characters are populated by attractive and talented versions of their former selves was brilliantly realized in 2009's Star Trek. J.J. Abrams is back directing the current continuation of the voyages of the Star Trek Enterprise with screen writers Roberto Orci, Alex Kurtzman and Damon Lindelof. They keep what all fans loved and appreciated in the series by making it fresh and ready for the next generation. True fans of the series and the movies have already been speculating on the return of a classic villain threatening the Federation. However for those too young or non-fans, they will be able understand the what's going on although they won't get the small nuances.

The movie opens with the new Captain Kirk (Chris Pine) doing what he does best, reacting by instinct. He's being chased by the indigenous inhabitants of a pre-technological civilization and going against Starfleet's Prime Directive in his attempt to save Spock trapped in a volcano. By ignoring the rules and regulations of Starfleet he gets his command taken away and he has to become the first officer to Admiral Pike (Bruce Greenwood). They attend a meeting of high ranking officers when a Starfleet facility in London was blown up. Somehow Kirk is the only one who figures out why, but not before some heavy casualties are incurred. Kirk and crew find themselves being sent to Klingon space to chase down the criminal John Harrington (Benedict Cumberbatch) holed up on an uninhabited planet. He has orders to shoot 72 long range prototype torpedoes at the planet. Instead Kirk on the advise of his crew captures him instead.

Kirk is dealing with some serious revenge issues when finds himself having to use Harrison who has revealed to him the bigger picture of what is happening around him. Suddenly he has to grow up from being a hot headed young captain to realizing that Starfleets' protocol is something that he grows to respect. It's great seeing glimpses of Shatner's Captain with a more sincere interpretation from Chris Pine. Quinto also softens his stiff necked Spock to realize his alternative self (Lenord Nimoy) who he met in the last movie had suggestions to him by embracing that human side. His romance with Uhura (Zoe Saldana) has some amusing moments too. Karl Urban does what he can with Bone's quaint folkisms while being Kirk's constant adviser. Scotty (Simon Pegg) has some problems with the new mission and walks off the job. Chekov (Anton Yelchin) dons a red shirt to become his replacement in engineering and Sulu (John Cho) gets to sit in the Captain's chair this time around. We are introduced to a new character Science Officer Dr. Carol Marcus (Alice Eve) who is the daughter of the Admiral (Peter Weller).

The Federation universe is nicely realized with a sense of place a more intimate look on how people live in this future world of 2259. There's scenes of London, San Francisco, the Klingon home world, the inside of engineering that's more machine than we have seen in the other Star Trek movies. Cars in the future float above the ground as does hospital gurneys. The visuals while outstanding is not the real drawing point of this film. It's the family dynamic of the Enterprise that fans have come to know and love and why this series keeps a loyal following. And when the familiar refrain of the theme song starts the film, it's nice to once more come home.
(Review by reesa)

Posted by Dallas Movie Screenings at 1:06 AM