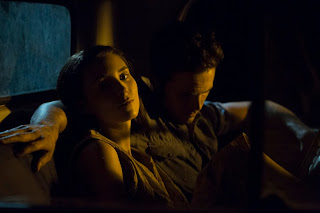 Texas writer/director David Lowery premiered his film St. Nick's won the 2009 Grand Jury Prize –Texas | MPS Studios Texas Filmmaker Award at AFI Dallas. He's back presenting a bigger film with a bigger cast that won the Special Jury Prize: Cinematography at the 2013 Sundance Film festival and was nominated for the Grand Jury Prize. It's a slow, atmospheric look at a doomed relationship of a Bonnie and Clyde type couple that meanders through their unhappy lives.

Casey Affleck plays Bob Muldoon, a notorious and not so smart outlaw who gets in a shoot out with the police after a job gone wrong. His accomplice wife Ruth (Rooney Mara) shoots a cop, but Bob takes the fall to protect her and their soon to be born child. After a few years in prison and writing letters everyday he begins to obsess about getting back to seeing his child he never met and reuniting with his true love. After 4 years he manges to escape and walk to Meridian, TX where Ruth is living with his baby girl. She has managed to keep her life together with the help of the town boss, Skerritt (David Carradine) who gives her a house next door to him. The local cop Patrick (Ben Foster) doesn't realize that it was Ruth who actually shot him on that fateful day and is attracted to her and the little girl.

As the object of attention from the three main male character, Rooney manages to remain complicated, strong, and straight forward. The delusional Bob hanging on to the memory of their love, and the dream of their family sets him on a course that could only come to no good. Skerritt's role is somewhat confusing as to his relationship with Ruth and Bob being a sort of parental figure to the orphans. Patrick is the quiet presence in Ruth's life, offering stability, and father figure for her daughter.

The pacing in the film often crawls as there's lots of empty space in the scenes. It's truly lovely to look at painted with it's dark earthy palette of what one would expect of a small Texas town. The tension builds with promise as Ruth must confront her husband with her new life. However, the climatic ending sort of whispers in the end instead of loud crash. The movie pays homage to the 70's movie melodramas with is sparse, terse, and minimalist dialogue. The acting is outstanding especially Rooney Mara who speaks with her eyes and body language. It's not a film for everyone and the slowness will test one's patience.
(Review by reesa)