One Direction: This is Us 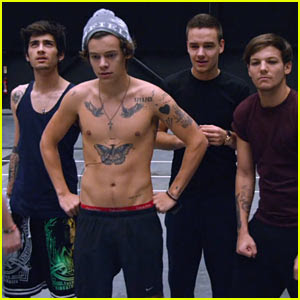 This movie the director Morgan Spurlock, presents the history and the life about five completely different individuals that were competing against each other in the Program “The X Factor”. These five boys were discovered by Simon Cowell in the U.K.’s 2010 X Factor competition. Simon wants to take a chance to integrate these 5 young kids and create a musical group. All of them have one thing in common love music and like to perform and each has a great voice. No one of them win in the completion.

One Direction This is us, is about the lives of the English-Irish pop group and their performances around the world; how Niall Horan, Zayn Malik, Liam Payne, Harry Styles and Louis Tomlinson as they travel the globe on their biggest tour to the date.

The movie ONE DIRECTION: THIS IS US is a captivating and intimate all-access look at life on the road for the global music phenomenon. Weaved with stunning live concert footage, this inspiring feature film tells the remarkable story of Niall, Zayn, Liam, Harry and Louis' meteoric rise to fame, from their humble hometown beginnings and competing on the X-Factor, to conquering the world and performing at London’s famed O2 Arena. Hear it from the boys themselves and see through their own eyes what it's really like to be One Direction
The band quickly gained a lot of fans who identify with them, because different factors, could be age, music the lyrics of the songs or they just like one of these 5 young boys. The band become very popular specially in the feminine area.

The band gained a lot of loyal fans, at the same time is following to become one of the competition's all-time most popular acts, finishing in the final three and garnering a gigantic and loyal fan base along the way.

In March 2012, One Direction's debut album, "Up All Night," made U.S. history, as it was the first time a U.K. group's debut album entered the U.S. Billboard 200 chart at No. 1. The band has sold over 13 million records worldwide. In November 2012, One Direction released their sophomore album, "Take Me Home," which includes the hit "Live While We're Young."

The Director of this film will make very happy the fans of One Direction, because he presents in a 3D so all the fans will feel so close to the band, so fans can have a close view of the life of group during Tour, a few hours to sleep, taking a plane to one city to another one, rehearsal before a live concert so fans will have a better understanding of the musical group.
Thanks to the creator of this movie, Morgan Spurlock understanding of 1D’s female fan-base there’s definitely only One Direction the boybands film is heading and that’s straight to the top of the box-office charts.
(Review by Diana Downing)

Email ThisBlogThis!Share to TwitterShare to FacebookShare to Pinterest
Labels: Diana Downing, One Direction This is Us