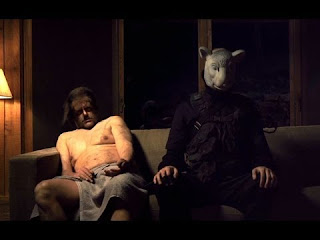 Don't go into this movie expecting a horror movie trying to be serious because you will be disappointed but if you expect a fun, cheesy B horror movie you are in for a treat. You're Next is a movie in the same ballpark as "Scream" where it's not a spoof movie but a horror comedy on a specific type of horror film and in this case home invasion movies. At first I thought it was going to be another horror movie trying to hard but once events started to happen I knew right away it was a "Scream" like film. Director Adam Wingard does bring a fun ride and does with what he can with a script that has cheesy dialogue but it's still not my favorite. The acting is average at best and some of the acting wasn't very good. The cinematography is that of shaky cam where the camera shakes uncontrollably during an intense. I am all for shaky cam but not when it looks like your cameraman is experiencing a earthquake. The film is edited fine to keep your attention and the special effects (blood and gore) is well done and when it happens they don't hold back. Overall it was a fun, gory movie but it wasn't the best. That goes to "Evil Dead". If you want a serious horror movie you will be disappointed. If you want a fun cheesy horror this will seem like a masterpiece to you. 7/10

On a side note, I have seen a lot of comedies this year, and besides "This is the End", this movie was the second highest in laughter from an audience.
(Review by Chase Lee)

Email ThisBlogThis!Share to TwitterShare to FacebookShare to Pinterest
Labels: Chase Lee, You're Next review