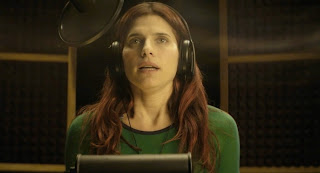 In a World … spotlights the charming talents of Lake Bell. As the film’s writer, director and star, Ms. Bell succeeds with delivering a funny, upbeat movie.

Who knew the world of Hollywood voice-overs could make such a good subject for a romantic comedy? It’s presented as a cut-throat world of sexism and opportunism, played for laughs but also with insight and hopefulness. There’s romance involved, but In a World also plays out like a dysfunctional family comedy but with more genuine feelings than we’re used to these days.

Lake plays Carol, a struggling actress who’s trying to find her niche doing voice-overs for films, movie trailers and commercials. She must deal with a domineering father (played perfectly by Fred Melamed) who’s in the same field and winds up competing with him for a prized job. It’s not hard to root for Carol because her basic goodness and steely sense of humor wins one over. Lake Bell is an engaging presence on the screen. Her character also tries to patch up her sister’s troubled marriage. At first, this seemed like simple fodder, but then she uses her tool of trade – a tape recorder – to bring the romance back into their lives. This detail demonstrates what a good script Lake has written.

Carol also provides vocal coaching, enabling other women to find their voice. Eva Longoria makes a cute cameo as herself, getting coaching from Carol for a particular accent in what is a droll episode. In a World …. is full of such scenes, all well-acted by its cast. As a director pulling all the elements together so nicely, Lake Bell proves she can put her vision up on the screen for audiences to enjoy.
(Review by David Bacon)


In a World Round Table Interview with Lake Bell