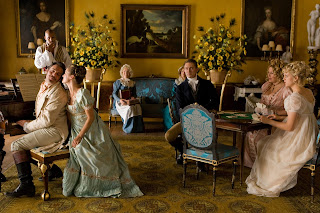 Shannon Hale's 2007 novel Austenland was one of those perfect summer books to enjoy on vacation has been adapted to the big screen by the writer of Napoleon Dynamite and Nacho Libre Jerusha Hell who also directed the film. What seems like another chic lit lite movie turns out to be a laugh out loud enjoyable romp for even the guys who will be dragged to the theaters.

Jane Hayes (Keri Russell) is a Jane Austen nerd. She is the equivalent of a Star Wars/sci-fi geek only with tea cups, frilly dollies, I heart Darcy signs and even a life size cardboard cut out of Colin Firth as Mr. Fizwilliam Darcy. It's no wonder she can't get a date. She takes her life savings and indulges in a vacation at the Austenland resort where clients are offered full immersion in the Regency Era England while living out the life of a Jane Austen heroine. There's different levels of program packages and unfortunately her basic level doesn't include the fancy dresses or the stately bedrooms. She gets the plain dowdy gowns and a room in the servant wings. She is assigned the name of Miss Erstwhile, an orphan who has come to stay at the beautifully appointed mansion in the British countryside. Other guest include Jennifer Coolidge as Miss Charming who has no clue about Jane Austen but wanted to come for the costumes and promise of romance. Georgia King is a returning client, Lady Amelia Heartwright who is married in her real life to an old guy. The affairs are run by Mrs. Wattlesbrook (Jane Seymour) who manages the actors and the scenarios so that everyone can enjoy the life in the novels.

Jane gets cozy with Martin (Bret McKenzie) the driver and stable hand who seems sympathetic and “in” on the joke of the whole concept. He's like a breathing room from the uptight attitudes and ridiculousness of the pretending not to notice that everyone is acting a part. James Callis is amusing at Colonel Andrews who centers his attention on the rich Miss Charming. Jane butts head with Mr. Henry Nobley (JJ Feild) the handsome Darcy type of character in the setup. As usual Jennifer Coolidge steals all the scenes as the rude, loud and wantonly sexual Miss Charming. And Georgia King is bouncy and delightfully daffy. The scenes are filled with oddness and some bad shtick. Soon like Jane we are also beginning to hope for some sense and sensibility. But put away your pride and prejudice and just enjoy an end of summer romance.
(Review by reesa)