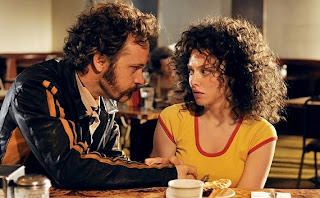 Amanda Seyfried does a remarkable job as Linda Boreman who lives in Florida with her parents Dorothy (Sharon Stone) and John (Robert Patrick). They moved from the Bronx after Linda got pregnant and her mother gave up the child for adoption. Her dad had to end his career as a cop and work as a security guard. Linda a typical young woman during the early 70's likes to have fun and pick up boys with her best friend Patsy (Juno Temple). She meets Chuck (Peter Sarsgaard) who has bad news written all over him, but Linda responds to his sweet talking. Soon she is defying her parents and moving in with her Svengali lover. He teaches her some bedroom tricks and when he gets into some financial trouble at his stripper bar, he pimps out his wife for the extra cash. Linda tries to go back home, but her overly religious mom tells her that she should be supporting her husband and do whatever he tells her. From there the control creep gets Linda to audition to this mob controlled porn filmmakers (Chris Noth, Bobby Cannavale, and Hank Azaria) who are impressed with her talents.

There really isn't any titillating scenes in this movie. Couldn't even classify any of the scenes as soft porn. The simulated scenes with Harry Reems (Adam Brody) mirroring the bad acting line readings from the real movie are funny. The film only looks at those heady days of Linda's career, but outside of the obvious trauma that she endured with her husband it doesn't look at the most interesting part of her life turning into an anti-porn activist. As a icon of the era womens sexual freedom Linda Lovelace became a household name, it's too bad the film doesn't go deeper.
(Review by reesa)

Posted by Dallas Movie Screenings at 1:26 AM