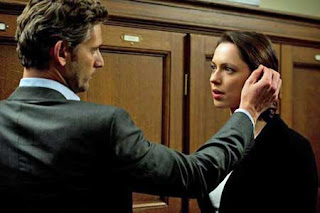 From the previews of the film it seems that the ever present CCTV cameras that capture everything and everyone at any given time in the big cities would either fill one with dread or reassure that if badness occurs then righteousness will prevail. The movie opens with a multi-viewed look at a marketplace in London. Snippets of conversations from various angles and locations are suddenly interrupted by a terrorist explosion. Director John Crowley (Boy A) and writer Steven Knight (Eastern Promises) follow two barristers (lawyers) who are assigned to defend the main suspect in a “trial of the century” that must be held in behind closed locked doors to protect national security.

Eric Bana as Martin Rose is given the case after the original lawyer committed suicide. Claudia Simmons-Howe (Rebecca Hall) is the special advocate who is also defending, but is not allowed to work along with Martin due to the secretive nature of the case. Both of them hide their previous close personal relationship which of course could taint the whole proceedings. The story follows each of them as they uncover the various truths about the suspect and his family. Everyone involved seems slightly shifty as the lawyers are highly suspicious that they are being watched and tailed. Their mentors, Ciarán Hinds and Jim Broadbent, seem to be offering conflicting advise. The tech Nazurl (Riz Ahmed) in charge of the secret testimony is tagged by Claudia as a MI-5 agent. With no one to trust they decide to only trust each other.

It doesn't take them long to figure out that the truth they are trying to uncover is putting them in danger. They are forced in the corner to either let it go and give the secret trial the suspect to hang, or they have to stick with their own basic concept of fairness and justice. There's no car chases, but there is plenty of tense moments as the chess pieces are moved around as they try and get the terrorist's son Emir (Hasancan Cifci) to the court in time.

This is mostly an underplayed movie. There are lots of interesting details of English law that differ from what Americans know of a trial court from television procedurals. The performances are very well done with tightly wound Narzurl, the smarmy Attorney General, and Julia Stiles shows up as a reporter that gives exposition on what the heck is going on, before unceremoniously leaving the story. It's a well paced film, but the ending sort of just happens then really nothing afterwards. It would have probably have worked better as a BBC series.
(Review by reesa)