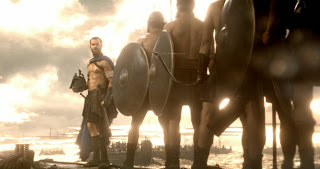 When I first saw 300 back in 2007, I was hooked on graphic novel adaptations. Zack Snyder directed the first one with such great visual style and really captured the feel of a graphic novel. The second one is just as visually awesome. That's the best way to describe these types of movies is bloody and awesome. Zack Snyder didn't direct this one but he produced so ultimately he had his hand in it but you can tell the director of this one really captured the beauty of the first. It's not as good as the first but I was still visually entertained. The acting is good and Eva Green is great as the villain but the main actor is no Gerard Butler. Gerard Butler brought a presence that is not matched here but still a valiant effort. The cinematography is absolutely gorgeous with fantastic lighting and visuals. The one thing I love about graphic novel adaptations is because the visuals look fantastic because it always looks like it jumps off the page of the source material. The editing is steady as you never worry about the length because you are just so damned entertained. If you don't like graphic novel looking movies (300, Sin City or Watchmen) then you will not like this movie but if you are a fan of the first 300 and/or love graphic novel adaptations you will have a blast with this one. I seriously thought they waited to long for a sequel but it feels like it picks up right away and time was wasted between the two. 7/10
(Review by Chase Lee)

Email ThisBlogThis!Share to TwitterShare to FacebookShare to Pinterest
Labels: 300 Rise of an Empire review, Chase Lee