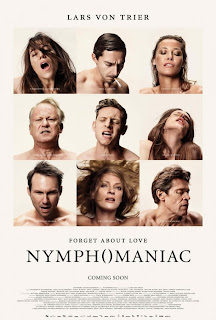 From the title alone you should know there is a lot of sex. So needless to say it can get pretty graphic, depressing and devastating for these characters but for some reason you can't keep your eyes off of them. This is from Lars Von Trier and Nymphomaniac is the third film in his "depression trilogy". Antichrist and Melancholia were before this one. I really liked Melancholia but really didn't like Antichrist. Does Nymphomaniac, at least volume 1, hold up? Yes and No. For the most part I really enjoyed it. Let's break this down. The directing by Lars is good for the majority of this film. Many people say he is self indulgent in his writing and you can definitely see it here. Some scenes have some laughable and unnecessary dialogue. With script like this the film felt clunky and uneven is some areas. The tone is right but those laughable scenes knock the movie down a peg. The acting is overall very good. I have no complaints. A lot of people hated Shia LaBeouf and his accent. I hated his accent too but overall I liked his performance. Another standout is Stacy Martin. She plays the younger version of the main character and I thought she was the best part in this. The cinematography is beautiful and sometimes haunting. The scenes are perfectly lit and shot setting the mood for this dark, depressing film. The black and white parts are equally as impressive. Say what you want about Lars Von Trier's questionable writing but he can shoot a movie. Every movie he has done is visually beautiful. The editing of this film is a bit slow sometimes. This is only volume one but at some times it felt like both parts. Listen this movie is not for everyone and I understand but besides the dialogue and some actors being silly and strange this is a powerful movie. I recommend it to hardcore film lovers but not to anyone curious about it. If you like a lot of sex and just overall sticky and depressing tone then enjoy it because for the most part I did. If you think this gets dark...wait until volume two. 7/10
(Review by Chase Lee)