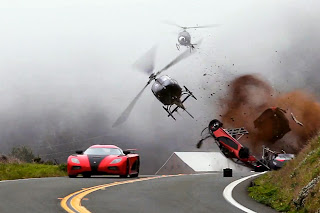 The script maybe cliche and simple but this is a damn entertaining movie. When you walk into a movie called Need for Speed expect the car races, crashes and explosions but don't expect a good story. A lot of people will compare this to Fast and Furious and rightfully so. However this is different because it feels more of like the cousin of F&F. There is nothing wrong with that but I can agree its a step below that franchise. Director, Scott Waugh, gives us an authentic car movie in terms of the little special effects that were used. Even the actors were the ones driving the cars. The car races and crashes were used with real cars and you can feel that heaviness when you watch it and it makes a difference. It makes for a more entertaining film and you can actually feel like you are there racing along side them. The acting is somewhat cheesy and forced, especially when they try and tell jokes, but I really liked Aaron Paul in this as the lead. He is coming off his Breaking Bad and I will watch anything with him in it but I felt like, even though the dialogue was cheesy, he was good in this role and you can tell he had a lot of fun with it. Everyone else does a good job but let's face it you see this for Aaron Paul as well. The cinematography is fun, exciting and intense in some parts. The races, like I said, are exciting and feel very real. That's all I can say about the cinematography. This movie is over two hours long and I have admit even though I was having fun there are a few parts that could have been taken out and made this film a bit shorter. With that said, the race scenes are fun and Aaron Paul carries this movie. This is a cheesy written film but I can't lie and tell I didn't have fun. This is a popcorn flick at it's finest. It's no F&F but it's very entertaining. 7/10
(Review by Chase Lee)