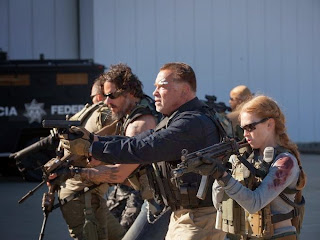 Schwarzenegger is back. Well, he's back again. At 66 he's still rocking the hard@ss action star with big guns and a body count. Directed by David Ayers (End of Watch and Street Kings) who wrote the script with Skip Woods(A Good Day to Die Hard and The A-Team). Plenty of experience for hard core action flicks. There's mountains of machismo dripping from every orifice in this Über violent and bloody film. However not one character elicits any audience sympathy or empathy. There's limited dialogue and it's only there to set up the next gruesome murder or revenge act.

Schwarzenegger plays John “Breacher” Wharton, the commander of an elite squad of undercover DEA agents. We are clued in early to the film that John is suffering from the horrific murder of his wife and son from some south of the border drug lords. His crew are titled with nicknames like Monster (Sam Worthington) and his wife Lizzy (Mireille Enos) who is also an operative, tough as nails and addicted to sex and drugs. Terrence Howard is Sugar, Joe Manganiello is Grinder, Josh Holloway is Neck, and Max Martini is Pyro. You will be slowly introduced to the characters and their quick and witty camaraderie. During one mission of taking down some drug cartel to locate the pallet full of cash one of their own is killed as the team was syphoning off some cash from the top. Supposedly they managed to wrap wads of bills into zip lock bags and drop them down the plumbing. When they go to retrieve it, the money is gone. This makes everyone suspicious of each other and the bosses at the DEA are convinced that one of them stole the money.

After 6 months of constant surveillance, John's boss closes the case and takes the team off of suspension so they can go back to business. Except members of the team are getting picked off one by one in horror movie style slice and dice. Police Investigator Caroline Brentwood (Olivia Williams), with a short hair cut and suits so you know she means business, decides to question the team, the DEA, and will not stop even though everyone tells her to forget about it.

The movie falls into the formula who done it, which you may figure out early in the game although there are plenty of red herrings thrown in to misdirect. The reasons for the mayhem are not entirely satisfactory only seeming like a plot device for more shoot outs and the big revenge scene with the Arnold at the end. If you got nothing else to do until Captain America comes out next week, this will keep one mildly entertained. Check your brain at the door and watch on an empty stomach.
(Review by reesa)