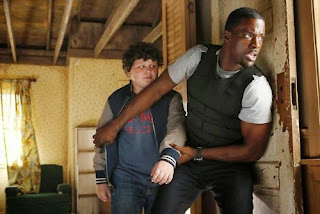 This was mediocre to say the least. I didn't necessarily hate it or love it but I might continue after the pilot. To me it felt like an average espionage FBI thriller that we have seen before. NBC recently has done The Blacklist (I really liked the pilot) and it has the same feel but the major difference? The Blacklist felt like it could have been a mini television movie but Crisis felt like a television show and nothing more. Even bright lighting with no contrast, bad acting and a so-so story. That's the way most television shows are or they are fantastic and we can't stop gushing about them (True Detective, Breaking Bad). I thought the tone was a mixed bag. One minute the audience was laughing and literally the next second they are in shock and awe. I don't think that's what the creator was going for. Or maybe he was and I am just dumb. The acting is all over the place as well. There was some good acting in this. Most of the adult actors really brought what they could for some of the terrible dialogue but they were not the problem. It was the teenagers. I thought they acting was so stale and lifeless that I was turning stale. I don't know how that makes sense but moving on. The cinematography was standard television. No interesting shots and no contrast in the lighting. The special effects were bad and hopefully they get better as the show progresses so I won't fault them that much for it. Overall it's bland and when the "twists" happen I didn't feel like they were that creative. When you watch it and have a different opinion I would like to hear it because I am curious. I didn't love nor did I hate it...down the middle. 5/10
(Review by Chase Lee)